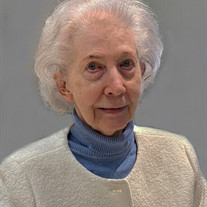 Having called Garnett, Kansas home for 85 years, Iona Mae (Hodgman) Sweers, known to many as Ione, passed away on Wednesday, December 29, 2021, at the age of 94. Born to Hazel and Harold Hodgman in 1927 in Concordia, Kansas, she grew up in Garnett, attending Irving Grade School and graduated from Garnett High School in 1944. After graduation, she attended Kansas University but ultimately decided to enter the working world in Kansas City. While working at Chandler's Flowers, she met Dick, who was working at a Plaza floral shop, Liesveld's. Iona was associated with the Garnett Greenhouse for over 50 years. Along with her husband, Richard (Dick) Sweers, she joined in the ownership in 1953 and eventually they took over sole ownership. She cherished the memories of her many lifelong friendships with customers and employees. After retiring from the Garnett Greenhouse, she volunteered her time providing needed transportation to medical appointments. Iona researched family histories and answered genealogical inquiries received at the Garnett Library. Most notably, she compiled an index of all burials in Anderson County and set up the "Locator Service" to help those looking for their ancestors' graves on Memorial Day. A member of the Garnett First Christian Church for nine decades, Iona volunteered for and organized many projects and activities of the church. Having traced her lineage to the Revolutionary Patriot, Jonathan Hodgman, Iona was a faithful member of the Four Winds Chapter of the Daughters of the American Revolution. She served as Regent in 2008, 2009 and 2011 and volunteered whenever needed. She was a member of the Delphian Chapter of the Eastern Star and the Anderson County Historical Society. In the 1990s, she was active in the creation of the Prairie Spirit Trail. Iona said it has been a great journey thanks to her family of whom she was always proud and her many friends, former employees, and customers. Iona was preceded in death by husband, Richard (Dick) H. Sweers on August 25, 2002. Iona is survived by her sons, Richard H. II (Hank) and wife Kathleen O'Sullivan and Karl and wife Margaret Dean; grandchildren, Sherdan Sweers, Callen Johnson, and Peter Sweers; and great grandchildren, Elizabeth, Reece, Caden, Maddyn, Graeson, and Lochlan. Funeral services will be held at 10:00 AM on Wednesday, January 5, 2022, at the First Christian Church in Garnett, Kansas. Burial will follow at the Garnett Cemetery. Iona's family will greet friends from 5:00 PM to 7:00 PM on Tuesday evening at the Feuerborn Family Funeral Service Chapel in Garnett. Donations in Iona's memory can be made to the Garnett First Christian Church. Condolences may be sent to the family at www.feuerbornfuneral.com

Having called Garnett, Kansas home for 85 years, Iona Mae (Hodgman) Sweers, known to many as Ione, passed away on Wednesday, December 29, 2021, at the age of 94. Born to Hazel and Harold Hodgman in 1927 in Concordia, Kansas, she grew up in... View Obituary & Service Information

The family of Iona M. Sweers created this Life Tributes page to make it easy to share your memories.

Send flowers to the Sweers family.