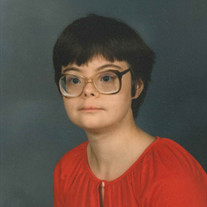 Holly Renee Meliza, age 53, of Paola, Kansas, passed away on December 18, 2020, at Olathe Medical Center, Olathe, Kansas. She was born at Anderson County Hospital in Garnett on June 14, 1967, the daughter of Robert and Franque (Chilcote) Meliza. At eleven months of age, she was diagnosed with Downs Syndrome. As a child, she lived at home with her parents in Garnett. She was enrolled in preschool at Lakemary Center in Paola, Kansas at the age of four. Holly began riding the bus to and from school at this tender age. She continued in education with Lakemary until graduation at age 18 at which time she began working in the Adult Program. She moved to Paola in 1988 to live in a group home with Lakemary Residential Program. She remained there except for a few months when she shared an apartment with a friend. In total, Lakemary had been a part of Holly’s life of 48 years and her home (living at the same address and same room) for 32 years. Without a doubt, Holly was blessed not only with her family she was born into but also her Lakemary family! Holly grew and blossomed with the care and direction provided there. Her Dad and family are grateful to Lakemary Center. Holly loved her church and attended both the First Christian Church in Garnett as well as the Christian Church in Paola. She enjoyed music and often when discussing songs, would refer to her mother teaching her the simple Bible School songs she found familiar. Other interests were TV game shows and the Perry Mason show. She knew all the characters of Perry Mason and would engage her visitors in conversation about them. Horses were also an intense interest, she never tired of receiving items with horse pictures. A special event for Holly once was visiting a farm where she was able to sit on a horse and pet it. Holly was known to all as a loving and friendly person, she was a major “hugger”. Family and friends will miss Holly for many reasons but this hugging comes to the top as #1. Holly was preceded in death by her mother, Franque Marcene Chilcote Meliza; her sister, Robyn Leota Meliza; grandparents, Robert Meliza Sr., Leota Whitaker Meliza, Charles and Helen Barber Chilcote, aunts and uncles. She is survived by her father, Robert Andrew Meliza, Jr.; also by aunts, uncles, cousins, and many friends. A Celebration of Life Service will be held at 2:00 p.m., on Monday, December 28, 2020, at the First Christian Church, Garnett, with burial following in the Garnett Cemetery. The family will greet friends on Sunday evening on December 27, 2020, from 6:00 p.m. to 8:00 p.m. at the Feuerborn Family Funeral Service Chapel, Garnett. In lieu of flowers, family suggests gifts/donations to Lakemary Center Foundation, 100 Lakemary Dr, Paola, Kansas, 66071 or to the First Christian Church, Garnett. You may send your condolences to the family at www.feuerbornfuneral.com. Holly Meliza's funeral service can be watched here: https://zoom.us/j/95111670209?pwd=c285UHh2My9FaGZIQWtVVTZYemFpdz09 Meeting ID: 951 1167 0209 Passcode: Meliza

Holly Renee Meliza, age 53, of Paola, Kansas, passed away on December 18, 2020, at Olathe Medical Center, Olathe, Kansas. She was born at Anderson County Hospital in Garnett on June 14, 1967, the daughter of Robert and Franque (Chilcote)... View Obituary & Service Information

The family of Holly Renee Meliza created this Life Tributes page to make it easy to share your memories.

Send flowers to the Meliza family.