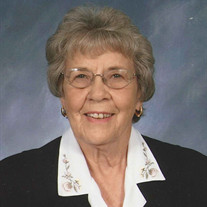 Hildred Lorene (Mowry) Ellison, 90, passed away on Wednesday June 9, 2021. She was born on March 7, 1931, at the family farm near Blue Springs, Nebraska to Waldo Emerson Mowry and Hildred Hull Mowry, joining 3 bothers and 3 sisters. Lorene attended Blue Grade School near Blue Springs, and at the age of 9, moved with her family to a farm near Humboldt. She attended Salem Grade School and graduated from Humboldt High School in 1949. On July 16, 1951, she married William Don Ellison at St. Joseph Catholic Church in Humboldt. She worked as a telephone operator at the Humboldt Telephone office and was employed at Neosho Memorial Hospital in Chanute as an admissions clerk for 23 years. She was a member of United Methodist Church in Humboldt. She was preceded in death by her parents; four brothers; three sisters; and son-in-law Michael Klarner. Lorene is survived by her husband, Don Ellison; sons, David (Amy) Ellison and Doug Ellison, Humboldt, Kansas; daughters, Lisa Klarner, Alba, Missouri, Lucinda Ellison-Lu, Bryn Mawr, Pennsylvania, and Loretta Ozbun (Brad), Rose Hill, Kansas; eleven grandchildren; and seven great-grandchildren. A service to honor the life of Lorene will be held at 10:00 A.M. on Thursday, June 17, 2021, at United Methodist Church in Humboldt, Kansas. Inurnment will follow at Humboldt Catholic Cemetery at a later date after cremation has taken place. Memorials in honor of Lorene are suggested to the United Methodist Church of Humboldt, Kansas and may be left with Feuerborn Family Funeral Service in Iola, Kansas or mailed to 1883 U.S. Highway 54, Iola, Kansas, 66749. Condolences for the family may be left online at www.feuerbornfuneral.com.

The family of Hildred "Lorene" Ellison created this Life Tributes page to make it easy to share your memories.

Send flowers to the Ellison family.