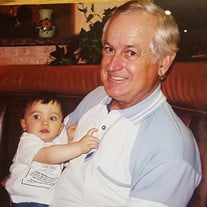 Herschel Dean Wilcox, age 82, known to his friends and family as "Dean", was called to his eternal resting place on February 1, 2021. Dean was a beloved father, grandfather, husband, brother, friend and a retired, disabled veteran who served in the Vietnam War and spent 20 years active duty in the United States Air Force (USAF) and 18 years as a Radiology Technician at San Bernardino County Hospital in San Bernardino California. Dean, also affectionately known as "Bud" to his family when he was younger, entered this world on August 5, 1938 in Kincaid, Kansas to parents Ellis Elmer and Ethel Wilcox. Shortly after graduating from Kincaid High School in 1956, he moved to live with his sister Melba Rice and family in Wichita, where he worked at a local grocery store. In 1958, he enlisted in the USAF and completed basic training at Lackland Air Force Base in San Antonio Texas. After basic training, he was transferred to Maxwell AFB Gunter Annex in Montgomery Alabama for medical training then on to Forbes AFB. He would later be stationed overseas at RAF Station, Lakenheath, England. After returning stateside, Dean was assigned to a Tactical Command Air Unit at Luke AFB in Arizona. After another brief overseas assignment at Burderop Park, England, he returned to Luke AFB where he would meet the love of his life, USAF Captain Peggy Mae Robertson, which he married in 1965 at the Little Wedding Chapel in Las Vegas, Nevada. Dean and Peggy went on to serve as overseas medics at Tachikawa AFB in Japan during the Vietnam War, during which time they welcomed the birth of their only child, Michael Dean Wilcox. After serving in Japan, Dean and family returned stateside and continued serving his country at Cannon AFB in Clovis, New Mexico. He also spent a year abroad at a small communications station at the top of a remote mountain peak in Turkey. Upon return, Dean transferred to Norton AFB in San Bernardino, California, where he and Peggy chose to permanently settle down in the neighboring City of Redlands, San Bernardino County, California. Following 20 years in the USAF, Dean retired from the USAF in 1978 and began training in Radiology at Crafton Hills Community College in Redlands. He began working as a Radiology Technician at San Bernardino County Hospital in 1980, where he later advanced to management and remained for 18 years until finally retiring permanently in 1998. When he wasn't working, Dean loved spending quality time with family and friends, especially at his little piece of paradise at the Wilcox Family Farm in his hometown of Kincaid, Kansas. Dean also enjoyed fishing, bird watching, family road trips (usually between California and Kansas), loyally rooting for the Kansas City Chiefs and spending time with his grandchildren. Dean was preceded in passing by his parents, Ellis Elmer and Ethel May (Dingus) Wilcox; brothers Arden, Kenneth and Walter Wilcox, sister Melba (Wilcox) Rice and nephew Edward Rice. Kenneth, in particular, was, in some ways, more like a father figure to Dean as he was about 20 years older and their father unfortunately passed when Dean was a young boy. He is survived by his beloved wife of 56 years, Peggy Mae (Robertson) Wilcox, sister Wanda (Wilcox) Weirich, brother-in-law Gene Weirich, sister-in-law Lillian (Tucker) Wilcox, niece Martha (Rice) McCartney, nephew David Weirich, son Michael Wilcox, daughter-in-law Denise Ann (Smith) Wilcox and grandsons Matthew Dean and Samuel James Wilcox. He was also preceded in passing by his life-long, very close friend who was always like a brother to him, Terry Smethers. In lieu of flowers, the family requests that donations be sent to: Farm Aid, The Gary Sinise Foundation or The American Kidney Fund. A graveside memorial service will be held at 1:00 pm, Saturday, March 27, 2021 at the Kincaid Cemetery, Anderson County, Kansas. All that knew and loved Dean are invited. COVID social distancing and mask protocols will be observed where applicable.

Herschel Dean Wilcox, age 82, known to his friends and family as "Dean", was called to his eternal resting place on February 1, 2021. Dean was a beloved father, grandfather, husband, brother, friend and a retired, disabled veteran who served... View Obituary & Service Information

The family of Herschel "Dean" Wilcox created this Life Tributes page to make it easy to share your memories.

Herschel Dean Wilcox, age 82, known to his friends and family...

Send flowers to the Wilcox family.