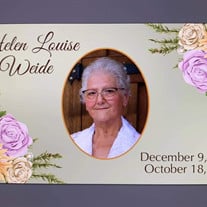 Helen was born December 9, 1955 in Iola to LeRoy Vernon and Helen Pauline (Anderson) Hill. She graduated from Iola High School. Helen married Timothy Pilcher in 1973, they later divorced. In April 1976, she married Galen Watts and were blessed with three daughters. They divorced in 1988. She married Robert Heiman in November 1999. He preceded her in death. In September 2015, she married Leslie Weide in Miami, Oklahoma. Helen worked in nursing for 36 years before becoming disabled. She loved her family, church, bingo, casinos and having family gatherings. Her pride and joys were her children, grandchildren, and great grandchildren. She is survived by her husband, Les, of the home; three daughters, Hope Watts-Garber (Steven) of Iola, Misty Watts-Harvey (Josh) of Iola, and Heather Payton (Sam) of Hartford; step-daughter Sarah Weide of Wichita; two step-sons, Andy Weide (Felicia Feneck) of Gas and Chris Weide (Naomi) of Wichita; five brothers, Vernon Hill (Jane) of Fort Scott, Robert Hill (Linda), Lawrence Hill and Rick Hill (Rhonda) of Iola and Jack Hill (Connie) of Chanute; one sister, Rebecca VanEtten (Kip) of Iola; eight grandchildren, Devon Kinzle (Jaqui) and Shailee Kemmerer of Emporia, Andrew Garber (Jessica) and Destiny Harvey of Iola, and Jayden Kemmerer (Rebekah), Justice Kemmerer (Beca), Kevin Kinzle and Keith Kinzle of Hartford; eight step-grandchildren and six great-grandchildren; and many nieces and nephews. She was proceeded in death by her parents, one half-sister Victoria Tredway and two husbands. Services held privately by the family to celebrate Helen’s life will be held on Saturday, October 24, 2020 at 11:00 a.m. at Iola First Church of the Nazarene. No visitation is planned. Private inurnment will be held at a later date. Memorials are suggested to the Iola First Church of the Nazarene and may be left with Feuerborn Family Funeral Service of Iola, Kansas.

The family of Helen Louise Weide created this Life Tributes page to make it easy to share your memories.

Send flowers to the Weide family.