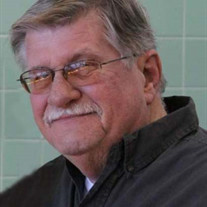 Harold E. "H.E." Holinsworth Jr., age 76, died Saturday, March 20, 2021 at his home in Humboldt, Kansas. H.E. was born August 13, 1944 in Stillwater, Oklahoma to Harold E. and Betty L. (Kirby) Holinsworth Sr. He grew up in the family businesses, one of which, was a motorcycle dealership. His passion for motorcycles was well known. He and his father took many road trips on their bikes as members of the Stillwater Road Kings Motorcycle Club. H.E. was known to do a little straight track and scrambles racing. Graduating in 1962 from Stillwater High School, he pursued a technical degree from Okmulgee Technical College (now OSUIT) as an auto-body technician. After finishing school, he started in the body shop business. After some time in this work, he went to work for Wonder Bread/ITT Continental Baking Company which moved him around the Midwest, settling in Humboldt, Kansas in 1973. H.E. made lifelong friends working for Wonder Bread and found his real passion: driving an over-the-road truck. He did this for 20+ years, retiring from Schiber Trucking in 2012 with over one million accident-free miles while hauling hazardous waste. In 1960, he married Judith C. Ritter in Drumright, Oklahoma and had two children, Cindy and Steve. On March 25, 1995, he married Donna (Stokes) Stotler and gained 3 daughters, Sheila, Shelly, and Ashley. H.E. is survived by his children, Cindy Holinsworth and Lora Hunt of Humboldt, Kansas, Steve and Barnie Holinsworth of Ft. Myers, Florida, Sheila Sigg and Shawn Gumfory of Iola, Kansas, Shelly and Mike Brown of Iola, Kansas, Ashley and A.J. Reno of Humboldt, Kansas; sisters, Yvonne and Bud Hornberger of Stillwater, Oklahoma, Pam Roberson of Stillwater, Oklahoma, and Daphne and Lyle Hoffman of Las Vegas, Nevada; grandchildren, Shannon (Andrew) Patterson, Garrett (Hannah) Brown, Dakota (Miranda) Sigg, Reghan Sigg (Ethan Malloy), Aliza Benedict, Lauren Holinsworth, Alivia Benedict, Paige Holinsworth, Jaylynn Reno, and Grace Reno; five great-grandchildren and one on the way; numerous nieces and nephews and friends that were like family to him. He was preceded in death by his wife; parents; brother-in-law, Doug Roberson; and a nephew. A private memorial service will be held at a later date. Memorials may be left to Wings of Warriors Cancer Foundation of Allen County or Harry Hines Hospice and may be left with Feuerborn Family Funeral Service or mailed to 1883 U.S. Highway 54, Iola, Kansas 66749. Condolences for the family may be left online at www.feuerbornfuneral.com.

The family of Harold E. "H.E." Holinsworth Jr. created this Life Tributes page to make it easy to share your memories.

Send flowers to the Holinsworth family.