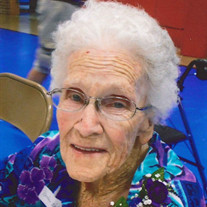 H. Berdean Wall, age 96, passed away Tuesday, April 5, 2022, at Allen County Regional Hospital in Iola, Kansas. Berdean was born June 20, 1925, to Roy L. and Nina (Lawson) Jarred in Altoona, Kansas. She graduated as valedictorian of her class from Altoona High School. After high school, she furthered her education at Pittsburg University. On March 9, 1944, she married Harold V. Wall in Altoona, Kansas. Berdean taught school for a few years before starting to farm with her husband. In her later years, she dedicated over 15 years of service to Walmart serving as the greeter and later became known as the "Walmart Grandma" to many children over the years. Berdean was a member of the United Methodist Church in Moran, Kansas, the Walnut Grove Card Club, and the E.H.U. Club. She enjoyed gardening, canning, caring for her property, helping with grandchildren and great-grandchildren, and volunteering at the senior center in Iola, Kansas. Berdean was preceded in death by husband, Harold Wall; parents, Roy and Nina Jarred; sisters, Arlene Jones (Walter), Wanda English (Bill), and Ruby Owens (Clarence); brother, Dorrall Jarred; and son-in-law, Wayne Garrett. Berdean is survived by daughters, Linda Garrett and Debra Carr (Rick); grandchildren, Katy Donovan (Dale), Ryan "Bo" Garrett (Andi), Justin "Ty" Garrett (Ashley), Joseph Carr (Taeler), and Derrick Carr (Kacie); 12 great-grandchildren; and numerous other family members and friends. A graveside service to honor the life of Berdean will be held at 2:00 P.M. on Thursday, April 14, 2022, at Highland Cemetery in Iola, Kansas. Family will greet friends from 6:00 P.M. to 8:00 P.M. on Wednesday, April 13, 2022, the night prior to the graveside service in The Venue at Feuerborn Family Funeral Service in Iola, Kansas. Memorials in honor of Berdean are suggested to St. Jude's Children's Hospital or the Children's Miracle Network and may be left with the funeral home or mailed to 1883 U.S. Highway 54, Iola, Kansas, 66749. Condolences for the family may be left online at www.feuerbornfuneral.com.

The family of H. Berdean Wall created this Life Tributes page to make it easy to share your memories.

Send flowers to the Wall family.