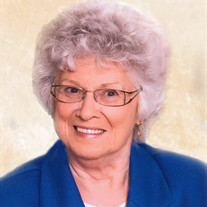 Gloria Gretchen Trumpp, age 90, passed away on December 24, 2021. Gloria was born in Riley, Kansas on November 16, 1931 to Henry R. Williams and Louise Agnes (Staten) Williams. She grew up in Riley where she graduated from Riley High School with the class of 1949. Gloria worked various jobs before going to work for Bell Telephone. Over her thirty year career she worked in El Paso, Texas and Sacramento, California before moving to Kansas where she worked in Junction City, Russell and then in Garnett where she retired from United Telephone in 1987. In her retirement Gloria became the Municipal Court Judge for the City of Garnett and served in that role for 15 years. Gloria was a member of the National Boat Racing Association. During the 1950's while racing her hydroplanes and runabouts Gloria raced under the name of "Shorty" to disguise her gender. Often times after winning she would remove her helmet and her competitors were dismayed they were beaten by a woman. In her later years, Gloria was very passionate in her faith. She especially enjoyed the trips she was able to take to the Holy Land. Gloria married Marvin Trumpp on August 6, 1949 and then again on December 29, 1990, in Riley, Kansas. Following her divorce from Marvin, Gloria married Lloyd Severance. They later divorced. Gloria married Gerald E. Lohff in 1981, Gerald preceded her in death in 1988. She was preceded in death by parents, three husbands, infant son, Theodore Lauren Severance, three brothers, Harland, Gene, and Doug Williams; two sisters, Helen Holt and Marilyn Perry. Gloria is survived by one son, Marvin Michael Trumpp Severance and wife Angie of Fort Scott, Kansas; one daughter, Susan Michelle (Severance) Wettstein and husband Don of Garnett, Kansas; three step daughters, Theresa Dione Hanke and husband Tom of Ponca City, Oklahoma, Tammy Sue Potes and husband Steve of Hot Springs Village, Arkansas, and Terry Lynn Poteet and husband Jim of Overland Park, Kansas; six grandchildren, Jeramy Severance, Kendalle Severance, Jason Wettstein, Brandon Wettstein, Sydney Poteet, and Riley Poteet; and nine great grandchildren, Katlyn Severance, Apachlynn Severance, Roper Severance, Eris Severance, Seqouyah Severance, Seneca Wettstein, Trent Wettstein, Easton Wettstein, and Sydney Wettstein; one great great grandson, Alcaous Severance. Funeral services will be held at 10:30 AM, Wednesday, December, 29, 2021 at the First Christian Church, Garnett. Burial will follow in the Garnett Cemetery. The family will be greet friends from 6:00 to 8:00 PM, Tuesday evening, at the Feuerborn Family Funeral Service Chapel in Garnett. Memorial Contributions may be made to the Garnett Community Foundation or to Good Shepherd Hospice or to First Christian Church of Garnett. Condolences to the family may be left at www.feuerbornfuneral.com Gloria Trumpp's funeral service can be watched here: https://vimeo.com/660782462

Gloria Gretchen Trumpp, age 90, passed away on December 24, 2021. Gloria was born in Riley, Kansas on November 16, 1931 to Henry R. Williams and Louise Agnes (Staten) Williams. She grew up in Riley where she graduated from Riley High School... View Obituary & Service Information

The family of Gloria Trumpp created this Life Tributes page to make it easy to share your memories.

Send flowers to the Trumpp family.