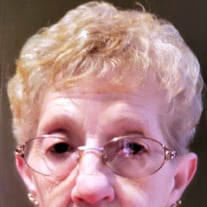 Gloria S. Springston Swift, age 70, of Iola, Kansas passed away on February 15, 2022 in Iola, Kansas. Gloria Sue Blevins was born on February 8, 1952 in Yates Center, Kansas. Gloria was the third of seven children born to Roy Eugene and Pauline Verena (Damron) Blevins. She grew up in the Toronto and Neosho Falls communities. Gloria married Dennis Springston on March 2, 1967, and they made their home in Iola. Two children were born to this union, Shane and Shelly. Gloria and Dennis later divorced. On April 22, 2006 Gloria married Clayton Swift at Independence, Kansas. They made their home in Deering, Kansas until Clayton passed away on February 15, 2010. Following the passing of Clayton, Gloria moved to Iola where she lived with her sister, Norma. Gloria loved to crochet and made many dolls for family and friends. Gloria was also a wonderful cook, her pies and bread will be missed by all who enjoyed them. Camping and fishing were two of Gloria's favorite outdoor activities. Gloria enjoyed a very special bond with her great niece, Alyssa, and they spent countless hours making crafts together. She was preceded in death by her parents; son, Shane Springston on October 30, 1985; daughter, Shelly Musgrove in May of 2009; grandson, Dustin Dozier on November 12, 2020; two sisters, Penny Harclerode and Paula Young. Gloria is survived by her sister, Norma McDaniel and husband, Don, of Iola; three brothers, Sam Blevins and wife, Betty, of Iola, Clinton Blevins and wife, Donna, of Independence, Kansas, and Mike Blevins and wife, Sally, of Iola; and many nieces and nephews and their families. Cremation has taken place. A memorial service is planned for a later date. Condolences to the family may be left at www.feuerbornfuneral.com.

The family of Gloria Sue Swift created this Life Tributes page to make it easy to share your memories.

Send flowers to the Swift family.