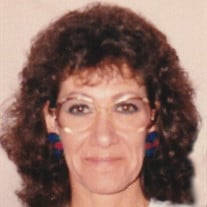 Gloria Jean Martin, age 71, of Welda, Kansas, passed away on September 9, 2021, at St. Luke's North Hospital, in Kansas City, Missouri. She was born February 9, 1950, in Moran, Kansas, the daughter of Daniel James Womelsdorf and Eva Marie (Carmean) Brecheisen. Gloria graduated from Garnett High School with the Class of 1968. She married Leland Miles Hicks and moved to California where he was stationed for the Navy. This union was blessed with one son, Lee, they later divorced. She married Donnie Foster and helped raise his two children. They lived in Welda and Arkansas, raising swine and managing an auto body shop before returning back to Kansas, and later divorced. Gloria then married LeRoy Martin, and later divorced. Gloria worked at the Rocky Roost Restaurant in Welda for many years, she worked at the Lee Sewing Factory in Overland Park, Kansas and opened the Welda Diner for many years before retiring. She was a member of the Jehovah Witness Church in Garnett. Gloria was known for making pies, knitting, caring for plants and flowers and loved her dogs. She was preceded in death by her parents, Daniel Womelsdorf and Eva Brecheisen; one son, Lee Hicks; and two sisters, Debra Womelsdorf and Brandi Brecheisen. Gloria is survived by two children, Melissa Nemecek and husband Mike of Olathe, Kansas and Timmy Foster of West Plains, Missouri; seven grandchildren and one great grandchild; step-father, William Brecheisen, Sr. of Iola, Kansas; step-mother, Ruth Womelsdorf of Welda, Kansas; three sisters, Linda Womelsdorf of Iola, Kansas, Shirley Cantrell and husband Robert of Kansas City, Kansas, Ginger Medina and husband Adrian of Pueblo, Colorado; two brothers, Dan Womelsdorf of Welda, Kansas, and Henry Womelsdorf and wife Chrissy of Kincaid, Kansas; and numerous extended family members. Funeral services will be held at 2:00 p.m., on Friday, September 17, 2021, at Feuerborn Family Funeral Service Chapel, Garnett. Family will greet friends one hour prior to the service at 1:00 p.m. Memorial contributions may be made to Welda Methodist Church. You may send your condolences to the family at www.feuerbornfuneral.com.

The family of Gloria Martin created this Life Tributes page to make it easy to share your memories.

Send flowers to the Martin family.