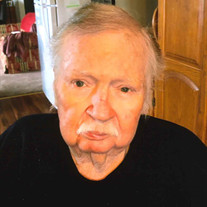 Glenn H. Kerr, age 78, of Parker, Kansas, passed away on Thursday, December 17, 2020, at St. Luke’s on the Plaza. He was born on May 18, 1942, in Garnett, Kansas. Glenn was the first of seven children born to Harland and Lillian (Troth) Kerr. He grew up on a farm west of Parker, where he helped his dad on the farm from a very early age. As a teenager, he also helped local farmers in the hay field in the summertime. Glenn graduated from Parker High School with the Class of 1960. Following high school Glenn worked at ANCO Cheese for several years. On August 5, 1967, Glenn was united in marriage to Linda L. Hosier. They were blessed with five children. They made their home in Lawrence, Kansas, until 1993, when they moved to a farm north of Parker. After he was married, Glenn still helped his dad on weekends when he could. Glenn loved the farm throughout his life, they bought their first farm in 1973. He worked for Hallmark Cards in Lawrence for over 35 years and farmed on the weekend. In 2005, health complications required Glenn to give up his row crops. It was very hard for him to give up that part of his life, he and Linda then began raising cattle. Glenn enjoyed watching his sons play sports, coaching their little league teams and going to his daughter’s school concerts. His grandchildren were “Popple’s” pride and joy. Glenn loved horseback riding and quail hunting, and just being outdoors on the farm. He was a big KU fan. Glenn was a member of the Beagle United Methodist Church, PBF (Parker, Beagle, Fontana) Church Board, lifetime member of the Parker Historical Society, and was on the Parker Library Board for eight years. Glenn was preceded in death by his parents; father and mother-in-law; sister, Katherine Dick; and infant son, Wesley. He is survived by his wife, Linda, of the home; son, John of Lawrence, Kansas; daughter, Brenda of Florida; son, Kevin and wife, Jennifer of Lawrence, and son, Brett of California; seven grandchildren; two great grandchildren; three brothers, Charles and wife, Debbie of Iola, Kansas, James of Garnett and Roger and wife, Kim of Osawatomie, Kansas; and two sisters, Judy Grantham and husband, Bob of Moore, Oklahoma and Carol Brownell and husband, David of Beeville, Texas. Graveside funeral services will be held at 1:30 PM on Wednesday, December 23, 2020, at the Parker Cemetery. Glenn will lie in state on Tuesday from 8:00 AM - 8:00 PM at the Feuerborn Family Funeral Service Chapel in Garnett, Kansas. Memorial contributions may be made to Beagle United Methodist Church and left in care of the funeral home. Condolences may be sent to the family at www.feuerbornfuneral.com

The family of Glenn H. Kerr created this Life Tributes page to make it easy to share your memories.

Send flowers to the Kerr family.