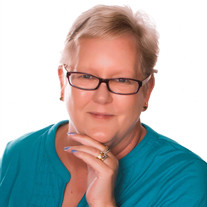 Glenda L. Tastove, age 66, of Garnett, Kansas, lost her fight to cancer on Friday, August 6, 2021, at Residential Living Center, Garnett, after being diagnosed on January 14, 2013. She was born Sunday, July 31, 1955 in Kingman, Kansas, the oldest daughter of Donald Glen and Hilda E. (Rockers) Lankard. Glenda lived in Anderson County all of her life. She attended schools in Garnett and graduated with the Class of 1973. Glenda married Patrick H. Tastove on July 29, 1978, in Garnett, Kansas. "Pat is a wonderful man and the love of my life". She worked various jobs in Garnett, Ottawa, and Iola. Glenda was a member of the Library Board, the Parish Council at Holy Angels, and the V.F.W. Auxiliary. She enjoyed babies, golf, reading, needlework, dancing, traveling, and riding in the blue car. One of her greatest joys was reading to the children. Glenda was courageous in her battle with cancer and she faced each challenge bravely. She wrote this accounting of her life to share what she thought was important. She was preceded in death by her father, Donald Lankard on January 14, 2009; one brother, Donnie Lankard on January 11, 1986; father-in-law and mother-in-law, Henry and Betty Tastove; three brother-in-laws, Ronnie Tastove, Steve Hess and Bill Stocks. Glenda is survived by her husband, Pat Tastove of the home; mother, Hilda Lankard of Garnett, Kansas; three sisters, Janet Stocks of Paola, Kansas; Nancy Lankard-Feuerborn of Bonner Springs, Kansas; and Helen Watt and husband Kim of Garnett, Kansas; Tastove brothers and spouses; and Tastove sister, Nancy Tastove Hess; many nieces and nephews; great nieces and nephews; aunts, uncles and many friends. Mass of Christian Burial will be held at 10:00 a.m., on Thursday, August 12, 2021, at Holy Angels Catholic Church, Garnett, with inurnment following in the Holy Angels Cemetery. A rosary will be held at 6:00 p.m., on Wednesday evening with visitation following at the Feuerborn Family Funeral Service Chapel, Garnett. In lieu of flowers, the family suggests memorial contributions be made to W.I.N.G.S. You may send your condolences to the family at www.feuerbornfuneral.com.

The family of Glenda L. Tastove created this Life Tributes page to make it easy to share your memories.

Send flowers to the Tastove family.