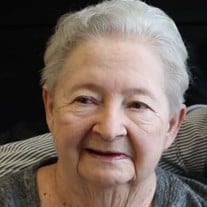 Glenda Lou (Ahlvers) Funk, age 86, of Garnett, was born the fourth of six children November 15, 1935 to John A.P. Ahlvers and Lena M. (Dieckman) Ahlvers,South of Glen Elder, Kansas in Mitchell County. She transitioned to her heavenly home on November 29, 2021, at the Residential Living Center, Garnett, Kansas. Glenda was born at home on the farm where she spent most of her childhood. She would help with chores and was always her dad's side kick, mucking the barn, feeding the livestock, and riding her horse Rocket. She loved that horse and if you know Glenda you know Rocket as well. Glenda graduated from Ionia,Kansas High School in 1953. She had many fond memories of playing on the girls' basketball team, tennis, softball, and cheerleading. She continued to enjoy watching sports throughout her life. Glenda met the love of her life, Harry S. Funk Jr. in high school and they married November 22, 1953. After high school they moved to Largo, Florida where Harry earned his Barber license and then moved them to his home town New Wilmington, Pennsylvania, building a home and buying the family barbershop. Glenda attended art school and loved drawing and painting. She was a natural artist as she continued to draw since she was a little girl. Glenda had a few jobs outside the home while her and Harry were waiting to start a family. She became a full time mother to two children, Harry III in 1962 and Holly in 1969. She was a stay at home wife and mother and active in the Boy Scouts and Cub Scouts until husband Harry's death in October 22, 1977. Glenda went to work at the Little People's Learning Center not long after and this is where she spent twenty four amazing years teaching the many community members of Garnett. She also was a big part of the Trinity Lutheran Church Garnett being a charter member of Faith Lutheran Ottawa. She taught Sunday school, vacation bible school, was on many boards, and evangelized to the many hearts she touched. Glenda also enjoyed her retirement years by going fishing, bird watching, traveling, reading, crossword puzzles, and spending time with her five grandchildren. She taught all of them how to fish and this is their biggest memories together. Glenda was a wonderful cook! She spent many hours in the kitchen cooking many of the old family recipes and shared her greatest ingredient which was "Love". Glenda enjoyed her family time, visiting with her great grandchildren, and especially loved spending time with them during her birthday and Christmas. She was preceded in death by her parents; husband, Harry S. Funk Jr.; brothers, Johnny D. Ahlvers and Larry D. Ahlvers; sisters, Hilda M. Dietz and Judy K. Richey. She is survived by her children, Harry S. Funk III and wife Connie of Kincaid, Kansas; Holly S. Davis and husband John of Garnett, Kansas; her grandchildren, Harry S. Funk IV and wife Candice of Lawrence, Kansas, Christina Felman and husband Nathan of Garnett, Kansas, Amanda Funk and husband Chris of Mulberry, Kansas, Tyler Davis and wife Miranda of Shawnee, Kansas, and Derek Davis and wife Katelyn of Gardner, Kansas, Kyle Kirkland and wife Destiney and their family of Garnett, Kansas; great grandchildren, Harry V, Julilah, Nicholas, Ariana, Anna, Paige, Ameliah, Carson, Trinity, Nevaeh, Kenzlie, Nataliah Lou, Daphne, Hazlie, and expecting Nathan Jr.; her sister, Lois M. Shrum and husband Leon and many nieces and nephews. Funeral services will be held at 10:30 a.m., on Monday, December 6, 2021, at the Feuerborn Family Funeral Service Chapel, Garnett, with burial to follow in the Garnett Cemetery. The family will greet friends at the funeral home on Sunday evening from 5:00 p.m. to 7:00 p.m. Memorial contributions may be made to Glenda Funk Memorial Fund. You may send your condolences to the family at www.feuerbornfuneral.com.

The family of Glenda Lou Funk created this Life Tributes page to make it easy to share your memories.

Send flowers to the Funk family.