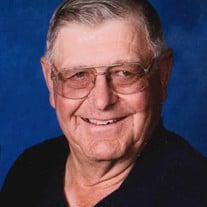 Glen A. Lickteig, age 83, of Garnett, Kansas, passed away on Friday, January 7, 2022, at St. Luke's South Hospital in Overland Park, Kansas. Glen was born on January 13, 1938, to August and Mary (Jockman) Lickteig at the family homestead northeast of Garnett, and was the fourth of 10 children. He attended school at Scipio through the eighth grade and then went to work in construction and started dairy farming, his lifelong vocation. He married Doris Bach at Holy Angels Church in Garnett on September 22, 1958. They had four children, Kevin, Cathy, Connie and Kurt. Glen and Doris were married 59 years. They made their home at the farm where Glen was born. They worked together on the dairy farm from 1960 to 1992. They continued to raise cattle and farm until 2010 when they moved to Garnett. Glen continued to be involved in the farming operation and enjoyed driving through the country and looking at the crops and fields. He was an avid Royals fan and never missed a game on tv or the radio. Fishing was also a passion he shared with his son, grandsons, and great-grandsons. Glen was a member of the St. Boniface Catholic Church at Scipio and then Holy Angels Catholic Church at Garnett. Glen served in the Army National Guard from 1958-1963. He was also a 66-year member of the Knights of Columbus and was always very active in his church and American Legion Post# 6397, Garnett. Glen was preceded in death by his wife, Doris, in 2017; son, Kurt, in 1985; his parents; and two brothers, Marvin and Harley. He is survived by son Kevin Lickteig and wife Kerry of Olathe, daughter Cathy Barnes and husband Mike of Garnett and daughter Connie Powls and husband David of Holton. He is also survived by seven grandchildren, Seth Lickteig and wife Amanda of Emporia, Dane Lickteig and wife Molly of Prairie Village, Spencer Lickteig of Grand Rapids, Michigan, Kirby Barnes and wife Kim of Garnett, Keegan Barnes and wife Whitney of Garnett, Michael Powls and Shannon Harvey of Holton and Justine Powls and fiancé Cameron Gallet of Mission; 11 great-grandchildren: Charles, Hazel and Curtis Lickteig; Brody, Brystol, Braxton, Brailyn, and Briar Barnes; Paxton, Brisyn, and Aiyden Powls-Harvey; and seven brothers and sisters, Juliana Mader, Cecil Lickteig, Oralee O'Brien, Carmen Holmes, Gene Lickteig, Margaret Cunningham and Roy Lickteig. Mass of Christian Burial will be held at 10:30 A.M. on Thursday, January 13, 2022 at Holy Angels Church in Garnett, Kansas. Burial will follow in the Holy Angels Cemetery in Garnett. A Rosary will be held at 6:00 p.m. on Wednesday evening, followed by visitation at the church. Due to COVID-19 concerns, facemasks are recommended inside for the rosary and mass. Memorials are suggested to Holy Angels Church or USD 365 Endowment Association. You may send your condolences to the family at www.feuerbornfuneral.com. Glen Lickteig's funeral service can be watched here: https://vimeo.com/664978512

The family of Glen A. Lickteig created this Life Tributes page to make it easy to share your memories.