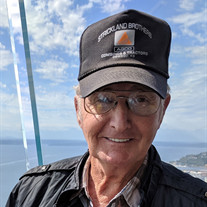 George "Gene" Covey, age 76, passed away Monday, November 15, 2021, at Allen County Regional Hospital in Iola, Kansas. Gene was born March 2, 1945, to George Junior and Betty Loyce (Reiswig) Covey in Wichita, Kansas. Gene became a lifelong farmer in Moran, Kansas, after attending Pittsburg State University for four years. Being a farmer also included assuming many other roles for Gene. He became a good mechanic and you could find him working on many of his own things. He instilled these problem solving and hard working traits into his children as well, never missing an opportunity to educate them on new things. Gene was a member of the Marmaton Masonic Lodge #245. Gene was the type of person to give you the shirt off of his back. He was extremely selfless in his demeanor. This even extended into his love for animals. He was always taking care of them. From slugs, to deer, to dogs, they all were taken care of by Gene. Always known as friendly, kind, and generous.. And maybe a little ornery! If you were to have checked his pockets, you would have found them full of candy to hand out to all of the children he encountered. Gene didn't miss an opportunity to tell you his opinion either. He will be greatly missed for his bold, genuine, and frequent laughter, as well as his wealth of knowledge and advice. Gene is preceded in death by his parents, George and Betty Covey; and brother, Gary Covey. Gene is survived by fiance, Sherry Henry; children, Sharon Lucas and husband, Scott, and George Covey; step-daughter, Morgan Henry; brothers, Gilbert Covey and wife, Diana, and John Covey and wife, Trish; grandchildren, Alex and Zane Lucas, and Adalyn Covey; and numerous other family members and friends. A graveside service will be held at 10:00 A.M. on Tuesday, November 23, 2021, to honor the life of Gene at the Moran Cemetery in Moran, Kansas. Family will greet friends from 5:00 P.M. to 7:00 P.M. on Monday, November 22, 2021, in The Venue at Feuerborn Family Funeral Service in Iola, Kansas, the night prior to the service. Memorials in honor of Gene are suggested to A.C.A.R.F. of LaHarpe, Kansas, and may be left with Feuerborn Family Funeral Service or mailed to 1883 U.S. Highway 54, Iola, Kansas, 66749. Condolences for the family may be left online at www.feuerbornfuneral.com.

The family of George "Gene" Covey created this Life Tributes page to make it easy to share your memories.

Send flowers to the Covey family.