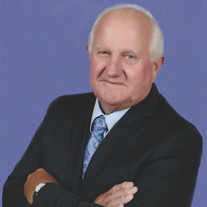 George Feuerborn of Overland Park, Kansas departed on his final flight from this earth Saturday, November 13, 2021. He was 79. George fought a courageous battle against Alzheimer's for several years, but peacefully surrendered to God's calling. George was born on November 25, 1941, in Greeley, Kansas the son of Ella (Miller) and Ambrose Feuerborn. He attended St. John's Catholic Grade School until the age of 11 when his father took a job with Sinclair Oil Company and the family moved to Wyoming. There they lived at Station 3 where George attended a one room schoolhouse. The family returned to Garnett, Kansas in 1955. George finished grade school at Holy Angels Catholic School and graduated from Garnett High School in 1960. After high school he enlisted in the United States Army and served two years active duty, of which 19 months were in Munich, Germany. He attended George Wallace Community College in Dothan, Alabama. In 1970 he received Aircraft Airframe and Powerplant licenses from Aero Mechanics School in Kansas City, Missouri. On June 19, 1965, he married Kay Young at Holy Angels Catholic Church in Garnett, Kansas. They began their life together in Mission, Kansas. Through their 56 years of marriage, Kay realized that when George said he was going to do something she may as well say "GO FOR IT" because it was going to happen. George finally decided at the age of 28 what he wanted to do when he grew up. He pursued his dream of being a pilot despite the many challenges in aviation at that time. Overcoming these challenges made him determined to help aspiring future pilots. He found great joy in mentoring several individuals pursuing a career in aviation. George logged in excess of 18,000 hours during his 37-year career which literally took him around the globe. In June 1971 he began his career with Semo Airways flying a mail route. He worked for six different corporations taking him and Kay to Mauldin, MO; Dothan, AL; Memphis, TN; and back home to Kansas City. In addition to being a corporate pilot, he was a flight engineer for Braniff, Inc. He acquired numerous type ratings during his extensive career. When he retired from Kansas City Life insurance company in October 2007, he indicated he had saved the best for last. Activities he enjoyed were playing basketball, running, including 5Ks and many marathons, playing golf, and above all riding motorcycles and touring with his brothers and friends. One of George's favorite memories was his childhood years at Station 3 in Wyoming. He frequently talked about his love of exploring the mountains and rugged terrain there, creating new adventures he'd never experienced. He continued frequent visits back to Station 3 during his lifetime. George and Kay also had many adventures together. At one point, the sight of a U-Haul truck became sickening as they moved from place to place as a result of George's career. Through their working years the two made time to visit relatives, long-time friends, and vacation throughout the United States. During retirement years they traveled abroad. Most memorable for them were a safari in Kenya, Octoberfest in Germany, and a Mediterranean cruise celebrating their 50th wedding anniversary. They also made life-time memories RVing through many states with friends and their family dogs. George and Kay are eternally grateful for the love of family and friends. During George's final years enduring this cruel disease, they were especially blessed with wonderful support from caregivers and other special people too numerous to list. George was preceded in death by his parents, a brother Myron and sister-in-law Mary. He is survived by his wife Kay, brothers Glen (Nikki), Larry, and Tom (Nancy), sister Carol Pickert (Jerry), many loving nephews and nieces, dear friends, and his dog Robbie. A funeral Mass will be held at Church of the Nativity in Leawood, KS on Wednesday, November 24, 2021, at 11:00 a.m. The family will meet with relatives and friends at 10:00 a.m. prior to the service. Interment will be held at a later date in Garnett, KS. In lieu of flowers, memorial contributions may be made to Unleashed Pet Rescue or a charity of your choice and sent to Feuerborn Funeral Family Home; P.O. Box 408; Garnett, KS 66032. Condolences may be sent to the family at www.feuerbornfuneral.com

George Feuerborn of Overland Park, Kansas departed on his final flight from this earth Saturday, November 13, 2021. He was 79. George fought a courageous battle against Alzheimer's for several years, but peacefully surrendered to God's calling. George... View Obituary & Service Information

The family of George Feuerborn created this Life Tributes page to make it easy to share your memories.

George Feuerborn of Overland Park, Kansas departed on his final...

Send flowers to the Feuerborn family.