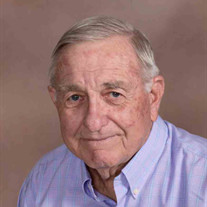 George “Jay” Daniels, age 86, of Elsmore, Kansas, passed away on January 12, 2021, at the Kansas Heart Hospital, Wichita, Kansas. Jay was born March 23, 1934, in Neodesha, Kansas, to George F. Daniels and Olive (McCoy) Daniels. Jay graduated in 1951 from Elsmore High School. He then served in the United States Army and was stationed in El Paso, Texas. Jay and Betty Croghan were married March 20, 1966, in LaHarpe, Kansas. Jay was a member of the First Baptist Church in Iola. Jay farmed and also worked at Gates Rubber Company in Iola. Jay served on agricultural boards during his farming career, including LaHarpe Farmers Union Cooperative and Allen County Farm Bureau. Jay enjoyed coffee and conversation with friends in the surrounding area. Jay was preceded in death by his parents. Jay is survived by his wife, Betty, of the home; and son, David, of Florida. There will be a private family graveside service followed by burial in the LaHarpe Cemetery, LaHarpe, Kansas. In lieu of flowers, memorials are suggested to the First Baptist Church or St. Jude Children’s Research Hospital, and may be left with Feuerborn Family Funeral Service, 1883 US Highway 54, Iola, Kansas. Condolences for the family may be left at www.feuerbornfuneral.com.

The family of Jay Daniels created this Life Tributes page to make it easy to share your memories.

Send flowers to the Daniels family.