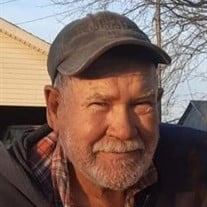 Gary Lee Collins, age 71, of Garnett, Kansas, passed away on Thursday, May 5, 2022, at his home. He was born October 1, 1950, in Garnett, Kansas, the son of Alva and Edna (Bell) Collins. Gary graduated from Garnett High School with the Class of 1968 and attended Allen County Community College, Iola, and then graduated from Fort Hayes State University, Fort Hayes, Kansas with a degree in Agriculture. Gary married Patricia Cure on June 1, 1974 in Burdett, Kansas, this union was blessed with five children. They met while attending Fort Hayes University. After graduation, he worked at the Larned Co-op, and then worked for her parents on the farm for six months, moving back to his hometown in Garnett. Gary worked at Taylor Forge Engineer Systems in Paola, Kansas for 40 years as an operator for the cut table, and retired on October 21, 2014. He continued farming and ranching. He passed doing what he loved. Gary and Patsy enjoyed sightseeing, trying out new restaurants, giving the grandchildren rides on the Kubota, and spending quality time with them. He was preceded in death by his parents, Alva and Edna Collins; one sister, Becky Lynn Collins; and one brother, Kevin Wesley Collins. Gary is survived by his wife, Patricia Collins, of Garnett, Kansas; his five children, Jeffery Collins and Bobbi of Kincaid, Kansas, Brian Collins and Regina Hurlock of Garnett, Kansas, Tammy Ramsey of Kincaid, Kansas; Theresa Collins and husband Michael Huelskamp of Mount Hope, Kansas; and Crystal Carey and husband Jerry of Garnett, Kansas; five grandchildren, Lyndsie, Emma, and Ellie Carey, Sadie and Dawson Ramsey; seven siblings, Arla Walton of Ridgely, Maryland, Cathy Wilson of Garnett, Kansas, Steve Collins and wife Sandy of Garnett, Kansas, Kenny Collins and wife Nancy of Lane, Kansas, Wanda Westphalen and husband Dean of Kearney, Nebraska, Clayton Collins and Tim Collins, of Garnett, Kansas; several nieces, nephews, and extended family members. Funeral services will be held at 10:00 A.M., on Thursday, May 12, 2022, at the Feuerborn Family Funeral Service Chapel, Garnett. The family will greet friends at the funeral home on Wednesday evening from 6:00 P.M. to 8:00 P.M. Memorial contributions may be made to the American Heart Association. You may send your condolences to the family at www.feuerbornfuneral.com.

Gary Lee Collins, age 71, of Garnett, Kansas, passed away on Thursday, May 5, 2022, at his home. He was born October 1, 1950, in Garnett, Kansas, the son of Alva and Edna (Bell) Collins. Gary graduated from Garnett High School with the Class... View Obituary & Service Information

The family of Gary Collins created this Life Tributes page to make it easy to share your memories.

Send flowers to the Collins family.