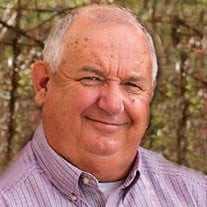 Galen Wayne Yoho, age 67, of Yates Center, Kansas, passed away August 14, 2021, at the Neosho Regional Medical Center, Chanute, Kansas. Galen was born December 30, 1953, in Yates Center, Kansas, to Glay "Corky" Yoho and Rosalie (Igou) Yoho. Galen was delivered by his future father-in-law, Dr. George R. Lee, and was given his first bath by his future mother-in-law. Galen attended school in Neosho Falls and graduated in 1972 from LeRoy High School, LeRoy, Kansas. He was active in sports, lettering in football, basketball, and track. Galen and Nedra Lee met in 1969 at the Woodson County Fairgrounds. They dated for several years and were married May 26, 1973, at the First Presbyterian Church in Yates Center, Kansas. They established their first home in Neosho Falls and later moved to Yates Center. Quentin Lee Yoho was born February 27, 1977, he was their pride and joy. Galen worked for several farmers after high school and was most proud of helping build the new Neosho Falls bridge. He graduated from the General Motors Training Center, Shawnee, Kansas, and began his career in automotive mechanics. He worked for several dealerships in the area before starting out on his own. He was a partner with Bob Chrisman in C&Y Repair for a number of years. Galen was the owner and operator of Yoho & Son Tire Cutting service for over 22 years until his passing. Galen coached peewee and little league when Quentin was growing up. He was very active in 4-H life, showing livestock as a kid and later with Quent and three grandchildren. He rarely missed a show. Galen continued to help his dad with his farming operation, always enjoying the farm life. Galen was always interested in city and county government. He served on the Yates Center City Council 1996 through 2001. He was elected as a Woodson County Commissioner in 2012 and served until January, 2021. Galen was a good husband, son, father, grandfather, brother, uncle, and friend. He never knew a stranger. Galen always had time for everyone. Galen was preceded in death by his mother, Rosalie Yoho; his brother, Michael Yoho; his father -in-law and mother-in-law, Dr. George R. and Lenora (Sterling) Lee. Galen is survived by his wife, Nedra, of the home, son, Quentin (Hollie) Yoho, Yates Center, Kansas; grandchildren, Aidan Yoho, Emery Yoho, Quinlyn Yoho, Yates Center, Kansas; father, Glay "Corky" Yoho, Neosho Falls, Kansas; brother, Tim Yoho, Louisburg, Kansas; sister-in-law and brother-in-law, Suzanne and Ron Shaffer, Yates Center, Kansas, nephew, Jeremy (Egreis) Shaffer, Overland Park, Kansas; three great-nieces; three great-nephews; and numerous other relatives and friends. A visitation will be from 6:00 p.m. to 8:00 p.m. on Tuesday, August 31, 2021, in The Venue at Feuerborn Family Funeral Service, 1883 US Highway 54, Iola, Kansas. A funeral service will be at 10:00 a.m. on Wednesday, September 1, 2021, in the chapel at Feuerborn Family Funeral Service, Iola, Kansas. Burial will follow in the Yates Center Cemetery, Yates Center, Kansas. Memorials are suggested to the Galen Yoho Memorial Scholarship, and may be left with Feuerborn Family Funeral Service. Condolences for the family may be left at www.feuerbornfuneral.com.

The family of Galen W. Yoho created this Life Tributes page to make it easy to share your memories.

Send flowers to the Yoho family.