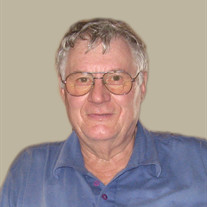 Frederick John Setter, age 86, of Greeley, Kansas, passed away on Sunday, July 18, 2021, at Residential Living Center, Garnett, Kansas. Fred was born on October 22, 1934 in Iola, Kansas, the son of Ed and Rose (Hieman) Setter. He was one of six siblings, Rosemary, Fred, Ruth, Kenny, Tom and Judy. The family moved to Greeley, Kansas when he was five years old. He attended St. John's Grade School and Greeley High School, graduating in 1952. Fred was a star basketball player, set many records and led the Wildcats deep into the playoffs. Fred enjoyed his childhood with his family and friends and particularly loved Greeley and the surrounding area. In the winter of 1952, (after a basketball game) Fred met Marlene Carr of Garnett. They reconnected a few years later and in October of 1956, Fred and Marlene were married. They lived in Garnett and soon welcomed their first daughter Kathy. Shortly after, Fred moved the family to Colorado, and their family grew with the additions of another daughter and three sons, Karen, David, Mark and Mike. He worked a few different jobs before joining Mountain Bell. That began his long career with the Bell Telephone Companies. In 1967, Fred transferred to Southwestern Bell as they decided to move back to Kansas City to be closer to their extended families. Fred continued to work with them until he retired in 1996. In 1983, after raising their family together Fred and Marlene divorced. Fred's family continues to grow to this day with son and daughter in-laws Kathy (Paul), Karen (Michael - dec), David, Mark (Cathy), Mike (Wendi) and includes eleven grandchildren Jackie, Ashley, Sami, Chris, Matt, Steve, Nick, Joe, Jack, Lewis and Rosie, and three great-grandchildren Maren, Max and Isabel. Fred and Donna (Miner) Brummel were married on March 1, 1986. They made Greeley their home. During their courtship, before Fred retired, he resided with her son's Eric and Mike Brummel in Overland Park, Kansas. Post retirement, Fred enjoyed spending time with his grandchildren. In addition to working Sudoku puzzles, and making furniture, Fred enjoyed working in the yard, helping Eric and Mike with projects and family vacations to the beach. Fred loved his retirement in Greeley, spending time with his siblings and extended family in Anderson County. Fred is survived by his sons, Eric Brummel of Driftwood, Texas, and Mike Brummel of Osawatomie Kansas; and grandchildren, Jessica Brummel of Spring Hill, Kansas, and Ben Brummel of Louisburg, Kansas. Memorial services will be held 10:00 a.m., on Saturday, July 24, 2021 at the Feuerborn Family Funeral Service Chapel, Garnett. Memorial contributions may be made to Prairie Spirit Trail (through Garnett Community Foundation) and/or St. John's Catholic Church, Greeley. You may send your condolences to the family at www.feuerbornfuneral.com.

Frederick John Setter, age 86, of Greeley, Kansas, passed away on Sunday, July 18, 2021, at Residential Living Center, Garnett, Kansas. Fred was born on October 22, 1934 in Iola, Kansas, the son of Ed and Rose (Hieman) Setter. He was one of... View Obituary & Service Information

The family of Frederick John Setter created this Life Tributes page to make it easy to share your memories.

Send flowers to the Setter family.