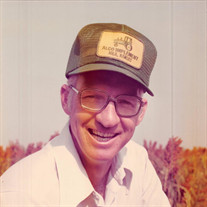 On April 6, 2022, Frank Specht passed on to his eternal home. He leaves behind his wife, Mandy; two children, Anita and John; and a sister, Mary Collins. Frank was born on November 7, 1934, to Carl and Mary (Konen) Specht in Piqua, Kansas. Frank attended elementary school at St. Martin's grade school in Piqua, and then went to Iola High School, graduating in the class of 1952. He grew up loving sports. He played football and baseball, but he was dedicated to basketball. He played for Iola High School, Iola Junior College, and Emporia State University. Frank's college years were interrupted by two years in the U.S. Army. After his military service, Frank completed his education with a master's degree in physical education at Emporia State. He became a teacher and basketball coach at Baileyville, Edgerton, Phillipsburg, and Iola. In 1966, Frank left teaching to begin farming in partnership with his brothers and eventually started his own farm operation. He was a pioneer of no-till agriculture in this area and believed in conserving the soil. Frank gave his time, money, and knowledge to many causes. He generously served his family and friends, always helping when a hand was needed. He loved his hometown of Piqua, building its rural water district, holding office on the board of the Piqua Coop, and volunteering on the St. Martin's parish council. He was a man of principles who will be missed by those close to him. Frank was preceded in death by his parents; and siblings, Bernice, Henry, Archie, and Lloyd. A graveside funeral service for Frank will be at 2:00 p.m. on Friday, April 15, 2022, in St. Martin's Catholic Cemetery, Piqua, Kansas. Memorials are suggested to the Allen County Animal Rescue Facility (ACARF), and may be left with Feuerborn Family Funeral Service, 1883 US Highway 54, Iola, Kansas. Condolences for the family may be left at www.feuerbornfuneral.com. The family requests everyone attending the graveside funeral service to please wear a mask.

On April 6, 2022, Frank Specht passed on to his eternal home. He leaves behind his wife, Mandy; two children, Anita and John; and a sister, Mary Collins. Frank was born on November 7, 1934, to Carl and Mary (Konen) Specht in Piqua, Kansas. Frank... View Obituary & Service Information

The family of Frank Specht created this Life Tributes page to make it easy to share your memories.

Send flowers to the Specht family.