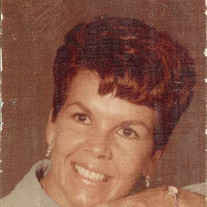 Jean Wooten, age 94, formerly of Elsmore, Kansas and Pismo Beach, California passed away on January 19, 2022 at the Moran Manor. Emma Jean Bergman entered this world on July 24, 1927 in Medoc, Missouri. Over the following 94 years Jean managed to live her life to the fullest. Jean was the second of four children born to Gilbert and Gertrude (McNeely) Bergman. She grew up in Nashville, Missouri, where she was an entertainer from an early age. Jean first sang on the radio at the age of three. As a teenager, Jean enjoyed a fateful evening of unexpectedly singing with Calvin Coday of Jasper, Missouri and his friend's band at a local pie supper. From this chance meeting, they were eventually married in 1943. Their married life began in rural Jasper, with Calvin soon after going to work in the shipyards in Richmond, California, during World War II. After the war, Calvin and Jean along with their two sons, made their way back to Missouri. In 1948, the now family of five moved to their new farm southwest of Elsmore, Kansas, where Jean loved driving the C tractor and cultivating. Calvin and Jean were blessed with three children, Calvin Jr., James Lee Roy, and Valerie Jean. Jean and Calvin divorced in 1962 and Jean moved to Los Angeles, California. Unconventional, is one of many adjectives that could be used to describe Jean, and life in LA would follow that theme. Her new life in LA was a far sight from Kansas, Jean worked as an undercover agent for the LA police department, working to catch drug dealers at that time. In her spare time Jean could be found reading the LA Times from front to back every day. Jean would also take on jobs refinishing furniture and painting and decorating offices. While living and working in LA, Jean met Robert Wooten, a public accountant from Santa Maria, California. On May 20, 1967, they were united in marriage in Las Vegas, and they enjoyed 31 years together. Bob and Jean made their home in Santa Maria until Jean's allergies nudged her to find another location for them to live. She eventually found a home in Pismo Beach, California for $17,000. Over the years Bob and Jean enjoyed countless rounds of golf and playing ping pong. Their shared love of gardening was always a part of their life. At the age of 74, Jean found herself as a widow upon the passing of Bob on January 9, 1999. This would be the beginning of another new chapter in her life. She sold her home in Pismo Beach and purchased 10 acres of The Mesa in Arroyo Grande, California. With that property she developed her orchard of fruit and citrus trees, including, bananas, lemons, limes, oranges, and avocados in addition to her beautiful flowers. The economic downturn of 2007 led Jean to leave California and return to Missouri, however, a broken ankle dictated her returning to the Elsmore area to be near family. She eventually moved into the assisted living facility in Humboldt, Kansas. She was preceded in death by her parents; her husband, Bob; two brothers, Raymond and Ronald; and her son, Calvin Coday Jr. on June 5, 2020; and one grandson, Brandon Coday. Jean is survived by her son and daughter, James Coday and Valerie Tomlinson of Savonburg, Kansas; daughter in law, Sandy Coday, of Elsmore; 9 grandchildren; 10 great-grandchildren; one great great grandson; sister, Juanita Johnston, of Dallas, Texas; and numerous other family and friends. A celebration of Jean's life is being planned for later in the year. Condolences to the family may be left at www.feuerbornfuneral.com.

The family of Emma Jean Wooten created this Life Tributes page to make it easy to share your memories.

Send flowers to the Wooten family.