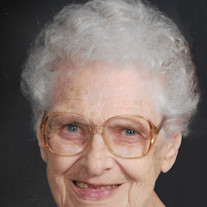 Elsie Pearl (Nagunst) Bell departed her earthly body on Friday, January 21, 2022, at the Life Care Center of Seneca, Kansas. She was born July 12, 1929, in Humboldt, Nebraska, to Otto C. Nagunst and Eva (Bowen) Nagunst. Later the family moved to Sabetha, Kansas. Elsie attended high school at the Colorado Bible School in Colorado Springs, Colorado. She graduated in 1948. After graduation, she worked at the Sabetha Hospital in Sabetha, Kansas, as a nurse's aide. It was in Sabetha, that she met Earl Bell, and they were married on October 3, 1956. They celebrated their 65th wedding anniversary on October 3, 2021. Elsie loved the Lord very much. When she prayed, the Lord heard. That is the reason Earl and Elsie were able to adopt a baby boy in 1966, when he was only a few hours old. They named him David Eugene Bell. He was killed in an automobile accident in 2005. Elsie played the piano in the church her husband pastored in Iola, Kansas. She also played the organ and the accordion. Elsie was preceded in death by her parents, her beloved husband Earl, son David, an older sister Florence Rosenberger, and two younger brothers. Elsie is survived by several nieces and nephews in Michigan, Texas, Iowa, Nebraska, Arizona and Kansas. Elsie will have a graveside service at 11:00 a.m. on Wednesday, January 26, 2022, at the Highland Cemetery in Iola, Kansas. Memorials are suggested to the Moran VFW, Moran, Kansas, and may be left with Feuerborn Family Funeral Service, 1883 US Highway 54, Iola, Kansas. Condolences for the family may be left at www.feuerbornfuneral.com.

The family of Elsie Pearl Bell created this Life Tributes page to make it easy to share your memories.

Send flowers to the Bell family.