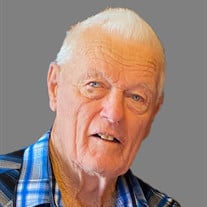 EJ Siefker passed away February 24, 2022, in Chanute, Kansas, at the age of 89 years. EJ (Elmer James) was the 7th of 10 children born to A.W. and Hilda (Tanke) Siefker. He was born on December 20, 1932, in Deep River, Iowa. EJ attended Brush College Country School in Deep River until 1947 when his family relocated to Burns, Kansas. He finished 8th grade in Burns before leaving school to join in working on the family farm. EJ was baptized in the Marion County Lake at age 14. In 1950, his family relocated to Moran, Kansas. EJ was drafted into the US Army in 1956, serving his basic training at Fort Hood in Killeen, Texas. On his two week leave, he was joined in marriage to Barbara Ensminger. They were married September 30, 1956, in the Moran Presbyterian Church. Four days after the wedding, he was deployed to Osaka, Japan, where he served as an Army Medic. After serving his country, EJ was honorably discharged and returned to Moran, where he and his wife were blessed to raise three daughters. His farm operation grew to include farm ground in Manitoba, Canada. EJ's ranch near Moran included buffalo and a Texas longhorn herd. He and Barb entertained many school field trips on their farm. In 1976, EJ earned his GED followed by his real estate license. He and Barb's two brothers began Farm and Oil Realty. They also invested in Moran, where they helped establish Citizens State Bank and Moran Manor Nursing Home. Through the years, EJ was treasurer for the Moran Girl Scouts, served 11 years on the Marmaton Valley School Board, was a board member of the National Buffalo Association, Moran Ruritan member, Moran Day supporter, American Legion member, and loved spending time with his neighbors at the Walnut Grove Community Card Club. He attended Midpoint Baptist Church. EJ traveled to all 50 states and to four continents. In 1996, EJ and his wife bought a bed and breakfast in Tucson, Arizona. They spent 25 winters enjoying the sunshine, bird watching, and playing cards and board games. He never knew a stranger. He loved to visit, loved all things John Deere, loved going to auctions and collecting old tractors. EJ never really retired and kept involved in his farm and ranch businesses. EJ was preceded in death by his parents; brothers, Roy, John, and HR; sisters, Lorna Dolen, Helen Guthrie, and Evelyn Walsh; his beloved grandson, Austin Lord; and his beloved granddaughter, Ashley Lord. EJ is survived by his wife of 65 years, Barbara; daughters, Debra Tynon and husband, Pat, Moran, Kansas, Jamie Stodgell and husband, Michael, Moran, Kansas, Susan Siefker and Eric Welty, Bartonville, Texas; grandson, Jake Tynon and wife, Ashley, Moran, Kansas; granddaughter, Mackenzie Tynon, Auburn, Kansas; three great-grandchildren; sisters, Inez Dimitrijevich, Wayne, West Virginia, Irene Coltrane and husband, Ron, LaHarpe, Kansas; and brother, Ed and wife, Mary, Temple, Texas. A visitation will be Wednesday, March 2, 2022, from 6:00 p.m. to 8:00 p.m. in The Venue at Feuerborn Family Funeral Service, 1883 US Highway 54, Iola, Kansas. A funeral service to honor EJ's life will be at 10:00 a.m. on Thursday, March 3, 2022, in the chapel at Feuerborn Family Funeral Service. Burial with military honors will follow in the Moran Cemetery, Moran, Kansas. In lieu of flowers, memorials are suggested to the Moran Cemetery, and may be left with Feuerborn Family Funeral Service. Condolences for the family may be left at www.feuerbornfuneral.com. EJ Siefker's funeral service can be watched here: https://vimeo.com/683946234 EJ Siefker's graveside service can be watched here: https://vimeo.com/684246560

The family of E.J. Siefker created this Life Tributes page to make it easy to share your memories.

Send flowers to the Siefker family.