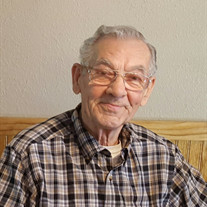 Edwin Lee Cole, age 79, passed away Wednesday, December 23, 2020 at Neosho Memorial Regional Medical Center in Chanute, Kansas. Edwin was born May 7, 1941 to Lester and Pearl (Teal) Cole in Colony, Kansas. He attended Iola High School in Iola, Kansas. On December 19, 1958, Edwin married Blanche “Annette” (Sanderson) Cole in Iola. Their union was blessed with four children. Edwin worked as a heavy equipment operator for the majority of his career. He established Cole’s Trash Service in 1999 and ran the business until 2012. He was a very hard worker and didn’t ever stop moving. Edwin was quite the conversationalist and story teller. He loved to talk and visit with family and friends and always had the ability to make them laugh. You could always find him raising some type of animal, from ducks to hogs, even guinea pigs. Family was very important to Edwin and he loved spending time with his kids and grandkids. Edwin is preceded in death by his parents; son, James Cole; brothers, Melvin Cole and Dean Cole; sister, Betty Sprague; and great-granddaughter, Abigail Sinclair. Edwin is survived by wife of the home, Annette Cole; daughters, Charlotte Wright, Shelly Sinclair, and Bobbie Nunnery of LaHarpe, Kansas; brother, Charles Cole of Gas, Kansas; nine grandchildren; thirteen great-grandchildren; three great-great-grandchildren; and numerous other family members and friends. A funeral service in honor of Edwin will be held at 10:00 A.M. on December 30, 2020 at Feuerborn Family Funeral Service. Family will greet friends from 5:00 P.M. to 7:00 P.M. on Tuesday, December 29, 2020 in The Venue at the funeral home. Memorials in honor of Edwin are suggested to A.C.A.R.F. of LaHarpe, Kansas and may be left with Feuerborn Family Funeral Service or mailed to 1883 US Highway 54, Iola, Kansas 66749. Condolences for the family may be left online at www.feuerbornfuneral.com.

The family of Edwin Lee Cole created this Life Tributes page to make it easy to share your memories.

Send flowers to the Cole family.