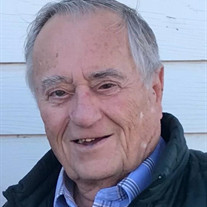 Edward James Toomey, age 81, of Gardner, Kansas, passed away on Wednesday, May 4, 2022, at his home. He was born May 17, 1940, in Kimball, South Dakota to Edward Thomas and Ella Esther (Dethlefsen) Toomey. He was always known as "Sonny" to all of his family. When Ed was 17 years old, he enlisted in the U.S. Navy. He served on active duty from September 27, 1957 to May 16, 1961, Rank E5, Petty Officer 2nd Class. He served on the U.S.S. Franklin D. Roosevelt aircraft carrier. He did seven Mediterranean tours and was part of the Navy fleet off the coast of Cuba during the Bay of Pigs invasion. Some of the offshore ports he visited were Italy, Greece, The Isle of Capri, France, Monte Carlo, French Alps, Spain, Sicily, Pompeii and many other locations. After he got out of the Navy, he moved to Garnett to work with his dad installing house siding. He then went to work at S&M Electric. He worked there several years, as well as Warner Manufacturing and Singer Plumbing and Electric. In 1969, he went back to S&M Electric. In September 1971, Ed purchased S&M Electric and ran the business until he closed it in March 1982. He later started Tec-Larm Fire Systems and continued to run the company up to his death. One of Ed's passions was airplanes. After obtaining his pilot's license, he owned his own planes. He was active in the Commemorative Air Force (CAF). He was instrumental in providing planning, materials, money, and labor to build the hangar which is now the home of the Heart of America Wing at New Century, Kansas. Ed was an active civic leader. He was elected Garnett City Commissioner in 1974 and served until March 1980, with the majority of those years serving as Mayor. He served as Anderson County Civil Defense Director, Garnett Assistant Fire Chief, and Anderson County Fire Chief. During the Garnett Grand Prix races, Ed ran the electric lines to the announcer's box for the sound system for the race events. In 1963, during the weekend of the races, Ed and his three brothers-in-law were part of the fire department response to the riots. Ed was a member of the First Christian Church, Garnett. He served as Sunday School Superintendent and Deacon for several years. He was a member of the Garnett Rotary Club, a lifetime member of the Elk's Lodge in Ottawa, a lifetime member of the Anderson County Historical Society, a national lifetime member of the Commemorative Air Force (CAF), member of the VFW in Ottawa, and a member of the American Legion in Gardner, Kansas. On January 20, 1962, he married Zella M. Kennard. This union was blessed with three children, Kristina L., Kathryn D., and Kerry M. Toomey. On August 31, 1984, he married Linna L. (Cramer) Kennard. Ed was preceded in death by his parents; his sister, Gloria Jean Toomey; son-in-law, James Kinney; brother-in-law, Terry Cramer; and niece, Robin Sibson. He is survived by his wife Linna, of the home; two daughters, Kristie Kinney of Garnett; Kathy Green and husband Gilbert of Colony, Kansas; one son, Kerry Toomey and wife Laura of Ottawa, Kansas; three stepdaughters, Andrea Wolken-Arnold and husband Steve of Ottawa; Lori Farr and husband Jack of El Reno, Oklahoma; and Shelly Serrioz and husband Steve of Gardner, Kansas. Also surviving are 13 grandchildren, Jessica Troyer (Jeremiah Boisclair), Felicia Benjamin, Jonathan Troyer, Tony Benjamin, Andy Benjamin, Zach Toomey, Austin Green (Scout), Abby Toomey, Mandy Duryea (Aaron), Chris Wolken, Michaela Serrioz, Jacob Serrioz, and Gracie Serrioz; 11 great-grandchildren, Breyanna Benjamin, Preston Boisclair, Kelsie Benjamin, Tyson Benjamin, Bella Boisclair, Jase Romines, Lincoln Benjamin, Riley Benjamin, baby Beckham Green, expected in June, 2022, Baylie Duryea (Tyler) and Peyton Duryea; brother, Jerry Toomey (Debbie), Mitchell, South Dakota; sisters, Nancy Boggs (Roger), Alexandria, South Dakota, Patty Hendrix (Gary), Mitchell, South Dakota, Vicky Cromwell (Rory) Mitchell, South Dakota, and brother, Magnus Frederiksen (LuAnn) of Yankton, South Dakota; sister-in-law, Linda Cramer of Lee's Summit, Missouri. He had many nieces and nephews. He also had many close friends and other family in Kansas and South Dakota. Funeral services will be held at 11:00 a.m., on Wednesday, May 11, 2022, at Feuerborn Family Funeral Service Chapel, Garnett, with burial following in the Garnett Cemetery. The family will greet friends at the funeral home one hour prior to the service, starting at 10:00 a.m. Memorial contributions may be made to the Edward J. Toomey Memorial Fund. You may send your condolences to the family at www.feuerbornfuneral.com

Edward James Toomey, age 81, of Gardner, Kansas, passed away on Wednesday, May 4, 2022, at his home. He was born May 17, 1940, in Kimball, South Dakota to Edward Thomas and Ella Esther (Dethlefsen) Toomey. He was always known as "Sonny" to all... View Obituary & Service Information

The family of Edward J. Toomey created this Life Tributes page to make it easy to share your memories.

Send flowers to the Toomey family.