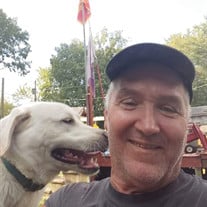 Edward J. "Eddie" Danford, age 59, passed away Tuesday, January 18, 2022, near Spring Hill, Kansas in Miami County. Eddie was born September 25, 1962, to James and Shirley (Richards) Danford in Iola, Kansas. He graduated from Iola High School with the class of 1981. He enlisted in the United States Army and served for three years. Eddie worked for Haldex for over 25 years until the company shut their doors. He then went on to drive a truck which he continued doing until his passing. Eddie married Melissa A. (Wells) Danford on June 1, 1991, in Iola, Kansas. Their union was blessed with two children, Zack and Tori. They later divorced. Eddie was an avid Kansas City Chiefs and Royals fan. He enjoyed attending motorsports events and vacationing in Oklahoma to ride ATVs at the sand dunes. He loves spending time with his family and making memories with his children. Eddie is preceded in death by his parents, James and Shirley Danford. Eddie is survived by children, Zack Danford and Tori Danford; companion, Cindy Greenwood; siblings, Janet Garber, Peggy Ashbacher, Marlin Danford, and Carlita Guiles; three grandchildren; dog, Chance; and numerous other family members and friends. A funeral service to honor the life of Eddie will be held at 2:00 P.M. on Friday, January 28, 2022, at Feuerborn Family Funeral Service in Iola, Kansas. Cremation will take place following the service. Family will greet friends from 6:00 P.M. to 8:00 P.M. on Thursday, January 27, 2022, the night prior to the service. Masks will not be required, but out of respect for the family, it is asked that if you are exhibiting any symptoms of illness, please watch the live stream of the service or wear a mask within the facilities at all times. Memorials in honor of Eddie are suggested to the Edward Danford Memorial Fund to help defray funeral costs and may be left with the funeral home or mailed to 1883 U.S. Highway 54, Iola, Kansas, 66749. Condolences for the family may be left online at www.feuerbornfuneral.com. Edward "Eddie" Danford's funeral service can be watched here: https://vimeo.com/670891008

The family of Edward John Danford created this Life Tributes page to make it easy to share your memories.

Send flowers to the Danford family.