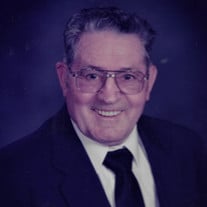 Earl Eugene Bell, age 92, passed away April 18, 2021, at Life Care of Seneca, Seneca, Kansas. Earl was born February 10, 1929, on a farm northeast of Goff, Kansas, to Everton Albert Bell and Hulda Iva (Bareiss) Bell. Earl attended Morning Star, a one room country school, until April, 1943, and graduated from Goff Rural High School in May, 1947. Earl and Elsie Pearl Nagunst were married in Sabetha, Kansas, on October 3, 1951. He served in the United States Army anti-aircraft artillery during the Korean war. Earl attended the Frankfort Pilgrim College in Indiana to obtain his Minister's Certificate of Ordination. He pastored at Pilgrim Holiness Church in Iola, Kansas until the Pilgrim Holiness Church and the Wesleyan Methodist Church denominations were merged. The church became the Wesleyan Church. Earl remained an ordained minister the rest of his life. In 1966, Earl and Elsie adopted a baby boy and named him David Eugene. David was killed in an auto accident in 2005. Earl was a life member of the American Legion, the Veterans of Foreign Wars and the Korea War Veterans Association. He was also a member of the Iola Chapter of the Kansas Old Time Fiddlers, Pickers and Singers. Earl was preceded in death by four brothers, Lawrence (Fort Morgan, Colorado), Noble (Wetmore, Kansas), Roy (Seneca, Kansas), Alvin (Goff, Kansas); and one sister, Opal (Bell) Adams (Centralia, Kansas). Earl is survived by his loving wife, Elsie, Seneca, Kansas; and his youngest brother, Gary, Holton, Kansas. A graveside service will be at 1:00 p.m. on Thursday, April 22, 2021, in Highland Cemetery, 1800 North Cottonwood, Iola, Kansas. Memorials are suggested to Life Care of Seneca, and may be left with Feuerborn Family Funeral Service, 1883 US Highway 54, Iola, Kansas. Condolences for the family may be left at www.feuerbornfuneral.com.

The family of Earl Eugene Bell created this Life Tributes page to make it easy to share your memories.

Send flowers to the Bell family.