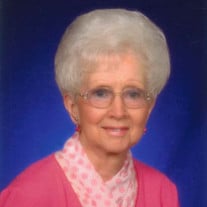 E. Marie Pierce, age 93, of Garnett, Kansas, passed away on Saturday, September 4, 2021, at the Coffey County Hospital in Burlington, Kansas. Marie was born Ethel Marie Donley on October 10, 1927, in Linn County, Kansas. She was the youngest of five children born to E.R. Donley and Maggie May McDaniel. She grew up on a farm in Linn County, Kansas, and learned the importance and value of hard work from an early age. She carried that with her throughout her life and enjoyed hard work and helping others. Although the family was poor, they never felt poor nor expected more than the simple joys of having just what you need to survive. After school, she moved to Kansas City and worked for Central Surety Insurance Company. Marie met and married Dennis A. Pierce and they had two children, Jerry and Deanna. They later divorced and Marie raised both children on her own in Garnett, Kansas, with the same hard work and determination that she learned on the farm. She worked as a single mom, initially at The Garnett Sewing Factory and then for 24 years at the Garnett State Saving Bank where she retired in 1992. She loved her work at the bank and loved running the proof machine. She found it a welcome improvement from the harsh conditions of the sewing factory, where she bent over a sewing machine in a non air-conditioned building for 8 hours a day. Getting paid by "the piece" was hard work, but she did what she needed to support her family. Marie was a strong, independent woman and did things on her own "because it had to be done". She did this in a time when most women had a man that earned the living for the household and the women stayed home and took care of the children. That didn't matter to Marie, and she did it all by herself and rarely complained, even if she was looked at differently because she was a single mom in the 60's when that was unheard of. Despite all of this, she always put good food on the table, had a "perfectly" clean house and had fashionable clothes to wear, which she and Deanna sewed for themselves. Marie was well known for her cooking, especially her homemade noodles and desserts. Her granddaughter, Aimee, shared how Marie enthusiastically supported her plans to sand down and repaint her first car in high school. Marie told her of how she had recently changed the oil in her lawn mower. She said "It felt good that I could do it. Learn all you can about everything, you never know when you will need it." Marie loved to walk, even to her bank job in her dress and high heels. She enjoyed her walks around Garnett, which she continued well up into her 80's. Marie was easy to spot on her walks because she was wearing one of the beautiful hats that she made herself. One fateful day a storm blew down a large tree limb as Marie was near home and "scared her to death". But she made it through unharmed as she always did and said "her angels from heaven had protected her". Her "angels" that preceded her in death were her parents, E.R. and May Donley; two brothers and two sisters, Henry Lee "Hank" Donley, Robert "Shorty" Donley, Erma Smith, and Leona Major. Marie is survived by her children, J. Pierce of Hoodsport, Washington, and Deanna Hedrick (Dave) of Overland Park, Kansas; four grandchildren, Andrea Pierce (Tripp), Aimee Kelly (Zane) and Robert Pierce (Christina) all from Washington state, Darcy Johnson (Traylor) of Emporia, Kansas; two great grandchildren, Mira Kelly and Jameson Pierce, with another great-granddaughter (due on Christmas Day). She will also be missed by many other relatives and friends. Funeral services will be held at 10:30 AM on Saturday, September 11, 2021, at the Feuerborn Family Funeral Service Chapel in Garnett, Kansas. Burial will follow at the Garnett Cemetery in Garnett, Kansas. Marie's family will greet friends on Friday evening from 6:00PM to 8:00PM at the funeral home. Memorial contributions may be made to Friends of the Prairie Spirit Trail and left in care of the funeral home. Condolences may be left for the family at www.feuerbornfuneral.com.

E. Marie Pierce, age 93, of Garnett, Kansas, passed away on Saturday, September 4, 2021, at the Coffey County Hospital in Burlington, Kansas. Marie was born Ethel Marie Donley on October 10, 1927, in Linn County, Kansas. She was the youngest... View Obituary & Service Information

The family of E. Marie Pierce created this Life Tributes page to make it easy to share your memories.

Send flowers to the Pierce family.