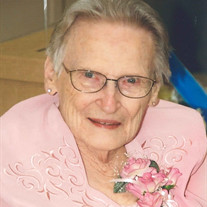 Dorothy (Pemberton) Scovill, age 92, passed away Monday, October 26, 2020 at Neosho Memorial Regional Medical Center in Chanute, Kansas. Dorothy was born April 12, 1928 to Alfred and Edna (Wisdom) Pemberton in Kansas City, Kansas. She grew up in the Kansas City, Kansas where she attended various schools before going to work for Lydia’s Café where she met her husband, Herschel Scovill. They dated two months and then got married February 14, 1946. Their union was blessed with six children. She worked for Miller’s Dress Factory as a seamstress for almost 20 years. In her spare time, Dorothy loved to bowl. She could be found tending to her garden in the summers. Dorothy loved to cook and found great joy in providing a meal for groups of people. She took every opportunity to make a meal for anyone that was willing that take a seat at her table. Dorothy is preceded in death by her husband, Herschel H. Scovill; parents, Alfred and Edna (Wisdom) Pemberton; daughter, Rita Ferne Scovill; three brothers, Frank, Gene, and Robert Pemberton; four sisters, Elsie Tye, Fay Horvatin, Audie Wilson, and Margie Parker. Dorothy is survived by three sons, Charles Scovill and wife, Betty, Herschel R. Scovill and wife, Mary, John Scovill and wife, Cindy; two daughters, Gayle Campbell and husband, Bill, and Lila Baker; numerous grandchildren, great-grandchildren, other family members, and friends. Funeral services in honor of Dorothy will be held at 12:00 P.M. on Saturday, October 31, 2020 at Feuerborn Family Funeral Service in Iola, Kansas. Family will greet friends starting at 11:00 A.M. until the service begins. Burial will follow at the Colony Cemetery in Colony, Kansas. Donations made in honor of Dorothy are suggested to St. Jude’s Children’s Hospital and may be left with the funeral home. Condolences for the family may be left online at www.feuerbornfuneral.com. Livestreaming of Dorothy Scovill funeral service Time: Oct 31, 2020 12:00 PM Central Time (US and Canada) Join Zoom Meeting https://zoom.us/j/94900974512?pwd=MWtBdHl1Z3dtN2xsRU5taGV5RUJndz09 Meeting ID: 949 0097 4512 Passcode: Scovill

The family of Dorothy (Pemberton) Scovill created this Life Tributes page to make it easy to share your memories.

Send flowers to the Scovill family.