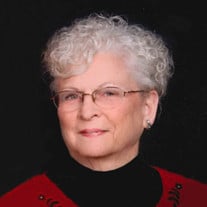 Doris Jean Rommelfanger, age 83, of Greeley, Kansas, passed away on Saturday, February 20, 2021, at St. Luke's Hospital in Overland Park, Kansas. She was born August 24, 1937, at home in Somerset, Miami County, Kansas, the daughter of Buford Opie and Elsie Mae (Morrison) Blackmore. Doris Jean grew up in rural Parker and Greeley, Kansas. She attended Parker Elementary, Sugar Valley one room school. She attended Greeley High School, Greeley, Kansas and graduated with the Class of 1955. Doris Jean married Richard L. Rommelfanger on September 3, 1956, at St. John The Baptist Catholic Church, Greeley, Kansas. This union was blessed with five children. She worked at the Greeley Café, operated by her parents, the Greeley Co-op, USD 365 Greeley Elementary as the school secretary. She and Richie purchased the Greeley Lumber Company in 1965, and in 1978, purchased the Greeley Hardware. Together, they made this the family business, until retirement. Doris Jean was a member of the St. John's Church and served as a lector for many years. She was a member of the St. John's Altar Society, V.F.W. Ladies Auxiliary, Greeley Town and Country, Third Order Oblate Ursuline Sisters, a member of the Zig-Zag Quilter's Club, Lambda Beta Sorority and was involved in many other civic activities. She enjoyed bowling, gardening, sewing, quilting, traveling, and genealogy. She loved playing with her children, grandchildren and great grandchildren. Things that were most important to her were her family, community, and civic responsibility. She was preceded in death by her parents, Buford and Elsie Blackmore; and an infant sister. Doris Jean is survived by her husband of 64 years, Richie Rommelfanger of the home; five children, Larry Rommelfanger of Greeley, Kansas, Mike Rommelfanger and wife Dana of Baldwin City, Kansas, Don Rommelfanger and wife Susan of Cassoday, Kansas, Sherry Carpenter and husband Robert of Yoakum, Texas, and Margie Bowman and husband J.C. of Greeley, Kansas; four grandchildren, Josh Rommelfanger, Sarah Rommelfanger, Michelle Haupt and husband Kyle, and Kristen Bowman; two great grandchildren, Wyatt Haupt and Laikyn Haupt; one brother, Frank Blackmore and wife Suzann of Paola, Kansas; one sister, Kay Hermann and husband Larry of Shawnee, Kansas; nieces, nephews and many extended family members and friends. Mass of Christian Burial will be held at 10:30 a.m., on Friday, February 26, 2021, at St. John the Baptist Catholic Church, Greeley, with burial following in the St. John's Cemetery. She will lie in state at the Feuerborn Family Funeral Service Chapel in Garnett on Thursday, February 25, 2021, from 10:00 a.m. to 8:00 p.m. Due to COVID the Rommelfanger family will not be greeting people as they normally would at a visitation. In lieu of the visitation the family has asked everyone to share a written memory of Doris Jean at the funeral home, church, on Doris Jean's online obituary page or mailed to the funeral home. Their sincerest desire is to keep everyone safe while still having the opportunity to honor Doris Jean. Memorial contributions may be made to Ursuline Sisters of Mount St. Joseph, St. John's Catholic Church or to the Greeley City Park, and can be left in care of the funeral home. You may send your condolences to the family at www.feuerbornfuneral.com.

The family of Doris Jean Rommelfanger created this Life Tributes page to make it easy to share your memories.

Send flowers to the Rommelfanger family.