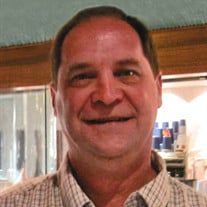 Donald R. Welsh, age 60, of Garnett, Kansas, passed away on Monday, January 11, 2021, at the University of Kansas Hospital. Don was born on May 9, 1960, in Garnett, Kansas. Don was the third of six children born to Gerald and LaNelle (DePoe) Welsh. He grew up on the family farm near Selma and graduated from Crest High School. Following high school Don attended the Wichita Technical Institute where he studied to be an automobile mechanic and auto body repair technician. Don lived and worked in Osawatomie and Wichita before he returned to Garnett. In 2010 Don opened Don and Mike’s Body Shop in Garnett. Throughout his years of working on cars, Don repaired and rebuilt many vehicles. His last few years were spent building 1967 Supernatural replica Impalas. Don enjoyed spending time with his friends, sharing a drink and the occasional burnout. He especially enjoyed the Wednesday evening game nights at his mom’s house. Don was a quiet person with a huge heart, he was willing to help anyone who needed a hand. Don was preceded in death by his father, Gerald Welsh; and his companion, Peggy Benjamin. He is survived by three children, Laury Hunsaker of Moran, Kansas, Amber Welsh of Enid, Oklahoma and Michael Welsh of Garnett; seven grandchildren; his mother, LaNelle Welsh of Selma, Kansas; two brothers, Daniel Welsh and wife Carla of McGregor, Texas and Lester Welsh and wife Debbie of Garnett, Kansas; three sisters, Christena McGhee and husband Kendall of Neosho Falls, Kansas, Pamela Yoder and husband Andy of Garnett, Kansas and Beth Davis and Donnie Ramsey of Colony, Kansas. Memorial services will be held at 10:30 AM, Friday, January 15, 2021, at the Feuerborn Family Funeral Service Chapel, Garnett, Kansas. Inurnment will follow in the Kincaid Cemetery. Don’s family will greet friends from 6:00 PM to 8:00 PM Thursday evening at the funeral home. Memorial contributions may be made to W.I.N.G.S. or Kincaid Selma United Methodist Church and left in care of the funeral home. Condolences may be sent to the family at www.feuerbornfuneral.com. Donald Welsh's fuenral service can be watched here: https://zoom.us/j/98165881770?pwd=MHk3dHdoT2crTjhrWGl1NEZRN0l5Zz09 Meeting ID: 981 6588 1770 Passcode: Welsh

Donald R. Welsh, age 60, of Garnett, Kansas, passed away on Monday, January 11, 2021, at the University of Kansas Hospital. Don was born on May 9, 1960, in Garnett, Kansas. Don was the third of six children born to Gerald and LaNelle (DePoe)... View Obituary & Service Information

The family of Donald Ray Welsh created this Life Tributes page to make it easy to share your memories.

Send flowers to the Welsh family.