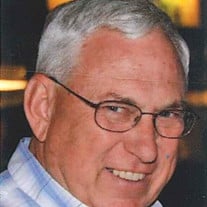 Donald Homer "Don" Stearns went home to Jesus on Friday, October 8, 2021 at age 73. Don was born to Elexis and Ethel Allene Stearns on October 17, 1947 in Scotts Bluff, Nebraska. As a child, Don spent his time with his nose in a book. He loved to study. Don met his wife, Deanna Schaffer in 1965, through her brother (and Don's friend) Steve Schaffer. After completing his military duty and a tour of duty in Vietnam through the Navy Reserve, they married on December 21, 1968, and went on to have four children: Don, Angie, Les, and Jamie. In addition to being a dedicated and loving husband, father, and grandfather, Don loved learning, teaching, and helping others. He was a soul-winner, mentor, Sunday school teacher, Pastor, Awana's Commander, Little League Coach, Community Service Worker, Police Officer, Paramedic and EMT Instructor/Coordinator. Throughout the past 48 years of his life, Don held an unwavering faith in God, which he shared with those who surrounded him. Don has been a King James Version Bible Student since his Salvation in 1974. He was ordained as a Pastor/Teacher of the Word of God in June of 2000 and served as a Pastor and Teacher from 2001 until 2021. Don was preceded in death by his parents, Elexis and Ethel; brothers, Bill, Earl, Tom, Bob, John, and Virgil; and sister, Barbara Jean. He is survived by his wife, Deanna Stearns of Moran, Kansas; four children, Don Stearns (Renee) of Elbert, Colorado, Angie Stearns of Castle Rock, Colorado, Les Stearns of Colorado Springs, Colorado, Jamie Stearns-Tennis (Brian) of LaCygne, Kansas; eight grandchildren; brother, Jim Stearns of Benedict, Nebraska; and sister, Janice Stearns-Tilly, of Genoa, Nebraska. A funeral service to honor the life of Don will be held at 2:00 P.M. on Thursday, October 14, 2021, at MidPoint Baptist Church in Moran, Kansas. Memorials in honor of Don are suggested to MidPoint Baptist Church and can be left with Feuerborn Family Funeral Service in Iola, Kansas, or mailed to 1883 U.S. Highway 54, Iola, Kansas, 66749. Condolences for the family can be left online at www.feuerbornfuneral.com.

Donald Homer "Don" Stearns went home to Jesus on Friday, October 8, 2021 at age 73. Don was born to Elexis and Ethel Allene Stearns on October 17, 1947 in Scotts Bluff, Nebraska. As a child, Don spent his time with his nose in a book. He loved... View Obituary & Service Information

The family of Donald Homer "Don" Stearns created this Life Tributes page to make it easy to share your memories.

Send flowers to the Stearns family.