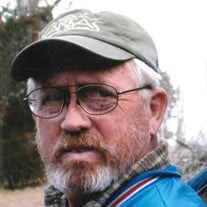 Don Wesley Stockton, 80, of Garnett, Kansas passed away on April 30, 2022 at his home with his family beside him. Don was born on February 5, 1942 in Garnett. He was the only child of Sam and Ruth (Van Horn) Stockton. Don graduated from Garnett High School in 1960. He went on to work for the state of Kansas Highway Department. In 1962, Don and his good friend, Ray Frazier enlisted in the United States Navy. They joined because of the buddy system, however they never saw each other after boot camp until they were discharged. Don was a Vietnam veteran, serving as a crew chief for F4 fighter planes on the USS Constellation. When not at sea, Don worked as an airplane mechanic on the various bases at which he was stationed. In June 1966, he was honorably discharged. Don's service to his country grew in importance to him as he got older. In the fall of 1965, Don met Sandy Koehler in the bar at Greeley, Kansas. They were married on October 1, 1966. Don and Sandy had two children, daughter Amy was born in February 1969 and son Mike in July 1973. After the service, Don went to work for his parents at Stockton Furniture. He bought the business in 1973 and ran it with his wife, Sandy, and parents until 1986 when they sold the building. Don was a substitute mail carrier for many years and drove an ambulance part-time. He went to work full time as a Rural Mail Carrier in 1986. It was a job perfectly suited for a man who loved to drive around in the country, check the fields and look for wildlife. Don was a volunteer firefighter, member of the American Legion and advocate of American Legion Baseball with his friend Lee Miller for many years. Being outside in the timber, cutting firewood, and hunting was where Don was most happy. He took pride in sharing his love of the outdoors with his family, especially his grandchildren. He and son, Mike developed an especially close bond hunting together along with his father Sam and eventually his grandsons, Sam and Synjin. Don and Sandy followed Mike's college playing career, where he was a member of the Ottawa University Baseball team. They traveled the country and made many close friendships with coaches, players and families. After Mike became the head baseball coach at William Jewell, Don went on to travel extensively with the team, riding the bus, eating meals with them and entertaining the players with his stories. Even when Don was unable to attend in person, he followed the games on the computer and waited for Mike's phone calls so they could rehash the games. Don's love for and pride in his family were what gave him joy, purpose and an incredible will to live. His wife, Sandy, their daughter, Amy, son-in-law, Rob Miller and grandchildren Sam and Grace and their son Mike, daughter-in-law Cindy and grandchildren Synjin and Sadie were the most important to him. He attended their games, family events and parties and looked forward to seeing them and hearing about anything they were doing. Don enjoyed a particularly close relationship with his nephew, Allen Pickert. His other great love was his dogs, some of his favorites were, hunting dogs, King and Bo, and his house dog, Ruby. Through the years, he always had a dog by his side. Don was blessed with many lifelong friendships, he was especially close to Rick Horn and Ray Frazier. His friendship with Rick lasted 75 years and with Ray since high school. He spent many hours helping friends farm and spending time with them at the "Oasis" and at Miller's Garage. Eventually, some of that group of friends met at Don's home where they spent afternoons together in his driveway, sitting under the trees or on the picnic table in the backyard and at friend Ray Frazier's garage. Don was preceded in death by his parents. He is survived by wife of 55 years, Sandy of the home, daughter, Amy Stockton-Miller and husband, Rob Miller, grandson, Sam Miller, granddaughter, Grace, all of Leavenworth, Kansas; son, Mike Stockton and wife, Cindy and grandchildren Synjin and Sadie of Kearney, Missouri. Memorial services with military honors will be held at 10:00 AM, Thursday, May 5, 2020 at the Feuerborn Family Funeral Service Chapel, Garnett. Don's family will greet friends from 6:00-8:00 PM, Wednesday evening at the funeral home. Memorial contributions may be made to the American Legion Post #48 or the V.F.W. Post #6397 and left in care of the funeral home. Condolences to the family may be left at www.feuerbornfuneral.com.

Don Wesley Stockton, 80, of Garnett, Kansas passed away on April 30, 2022 at his home with his family beside him. Don was born on February 5, 1942 in Garnett. He was the only child of Sam and Ruth (Van Horn) Stockton. Don graduated from... View Obituary & Service Information

The family of Don Stockton created this Life Tributes page to make it easy to share your memories.

Don Wesley Stockton, 80, of Garnett, Kansas passed away on April...

Send flowers to the Stockton family.