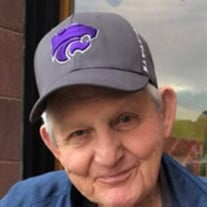 Dewey Allen Gambill, age 86, formerly of Iola, Kansas, passed away May 1, 2022, at Villa St. Francis Catholic Care Center, Olathe, Kansas. Dewey was born February 15, 1936, in Chanute, Kansas, to Clarence and Vida (Riley) Gambill. Dewey was the oldest of eleven children. Dewey and Jessie Phillips were married September 5, 1964 and were married for 36 years until her death in 2001. Dewey worked in manufacturing and area oil fields most of his life. In his retirement years, he operated a lawn service business until officially retiring in 2010 at age 74. Dewey's greatest joy in life were his grandchildren and visiting with his family. He passed his passion for fishing down to his children and grandchildren, spending many sunny afternoons at local farm ponds teaching them to land "the big one." He also enjoyed gardening and was always happy to share the bounty from his vegetable gardens. Dewey was preceded in death by his wife Jessie, parents Clarence and Vida, sisters Agnes Morlan, Phyllis Gumfory, Linda Johnson and brother Michael Gambill as well as long-time companion, Norma Yancey. Dewey is survived by daughter, Regina (Brad) McCausland, Olathe, Kansas, son, Robert Gambill, Broken Arrow, Oklahoma, grandchildren Mckenna, Allison, Kaylan, Madison, Lauren and Ethan and greatgrandchildren Annelise and Ryker. A funeral service to honor Dewey's life will be at 2:00pm, Monday, May 9th, in the chapel of Feuerborn Family Funeral Service, 1883 US Highway 54, Iola, Kansas. Burial will follow in the LaHarpe Cemetery, LaHarpe, Kansas. Memorials are suggested to Villa St. Francis Catholic Care Center, Olathe, Kansas and may be left with Feuerborn Family Funeral Service or mailed to Feuerborn Family Funeral Service, 1883 U.S. Highway 54, Iola, Kansas, 66749. Condolences for the family may be left online at www.feuerbornfuneral.com.

The family of Dewey Allen Gambill created this Life Tributes page to make it easy to share your memories.

Send flowers to the Gambill family.