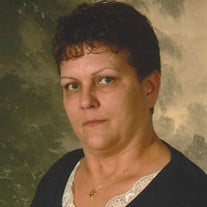 Deanna M. Maddox, 59, of Iola passed away unexpectedly on December 18, 2021. Deanna Marie was born February 13th, 1962, to Edgar and Rosemary (Westhoff) Maddox. Deanna attended Iola High School and later obtained her GED. She met and married Michael McCaskill and had two children. That marriage later ended. Deanna worked in several retail stores and later became a caregiver and helped those with developmental disabilities. She very much enjoyed and frequented thrift stores, rummage sales and NEVER passed up a good deal. Deanna was preceded in death by her parents, Edgar and Rosemary, along with her siblings, Gary and Mark Maddox. She is survived by her children, Stacey of Wichita, Kevin (Stephanie) of Grapevine, Texas, and Alena of Iola. Siblings, Debbie and Stevie of Neosho Falls, Suzanne (Bill) and Mary of Iola. Grandchildren, Cristian, Cameron, Colter, Joseph, Tabitha, Isaiah, Taylor and Jeremiah. Deanna is also survived by numerous nephews, nieces, and friends. Family will greet friends in The Chapel at Feuerborn Family Funeral Service in Iola, Kansas, from 6:00 P.M. to 8:00 P.M. on Thursday, December 23, 2021. Cremation will take place after the visitation with a private inurnment at a later date at Highland Cemetery in Iola, Kansas. Memorials in honor of Deanna are suggested to the Deanna M. Maddox Memorial Fund and may be left with Feuerborn Family Funeral Service or mailed to 1883 U.S. Highway 54, Iola, Kansas, 66749. Condolences for the family may be left online at www.feuerbornfuneral.com.

The family of Deanna M. Maddox created this Life Tributes page to make it easy to share your memories.

Deanna M. Maddox, 59, of Iola passed away unexpectedly on December...

Send flowers to the Maddox family.