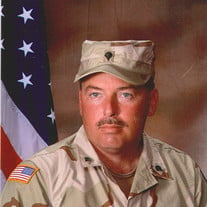 Dean Henry Kipp, age 53, of Piqua, Kansas, passed away February 3, 2021, at Neosho Regional Medical Center, Chanute, Kansas.  Dean was born December 9, 1967, in Iola, Kansas, to Henry C. Kipp and Jane (Lierz) Kipp. Dean graduated from Iola High School and Johnson County Community College.  Dean worked in construction.  He served his country in the Army National Guard for twelve years, including a 1-year tour in Iraq in 2005, with boots on the ground.   Dean loved to hunt and fish, and compete with his father about who could catch the largest fish or biggest deer.  Dean was a blessing to his family.  He was born-again and was a very good Christian.      Dean was preceded in death by his mother, Jane; and brother, David Kipp.  Dean is survived by his father, Henry C. Kipp, of the home; sister-in-law, Debbie Kipp, Saint Louis, Missouri; nephew, Jason Kipp, Saint Louis, Missouri; niece, Nikki Kipp, Saint Louis, Missouri; and numerous other relatives and friends. A memorial service will be held at 10:00 a.m. on Saturday, February 27, 2021, in the chapel at Feuerborn Family Funeral Service, 1883 US Highway 54, Iola, Kansas.   Inurnment with military honors will follow in St. Martin’s Catholic Cemetery, Piqua, Kansas. Memorials are suggested to Faith Assembly of God Church, and may be left with Feuerborn Family Funeral Service. Condolences for the family may be left at www.feuerbornfuneral.com.

The family of Dean H. Kipp created this Life Tributes page to make it easy to share your memories.

Send flowers to the Kipp family.