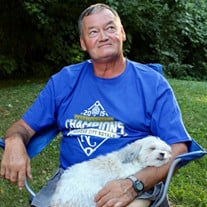 David Johnson, age 64, of Garnett, Kansas, passed away on Wednesday, April 14, 2021, in Waverly, Kansas. He was born January 18, 1957, in Iola, Kansas, the son of Raymond and Virginia (Douglas) Johnson. David graduated from Marmaton Valley High School in Moran, Kansas. David had been employed at Wheeler Lumber for 25 years. David shared 43+ years with Gladys Hunt. He was a devoted husband, father, and grandfather. David was an avid fan of KU Basketball. He was preceded by his parents, Raymond and Virginia Johnson. David is survived by his wife, Gladys Johnson, of the home; one son, Toby Hunt and wife Heather of Leawood, Kansas; one daughter, Valerie Gonzalez of Humboldt, Kansas; four grandchildren, Emma and Sophia Hunt, Brandi and Christopher Gonzalez; eight siblings, Richard Johnson and wife Janet, Lester Johnson and wife Carolyn, Ellen Turner and husband Earl, Peggy Butler and husband Dennis, Ed Johnson and husband Terry, Frank Johnson and wife Sally, Warren Johnson and wife Debbie, and Jim Johnson and Leiah; and extended family and friends. Funeral services will be held at 2:00 P.M., on Monday, April 19, 2021, at Feuerborn Family Funeral Service Chapel, Garnett, with burial following in the Garnett Cemetery, Garnett. David's friends may pay their respects from 2:30PM to 4:00PM on Sunday afternoon at the funeral home. Memorial contributions may be made to Sons of the American Legion. You may send your condolences to the family at www.feuerbornfuneral.com.

The family of David Johnson created this Life Tributes page to make it easy to share your memories.

David Johnson, age 64, of Garnett, Kansas, passed away on Wednesday,...