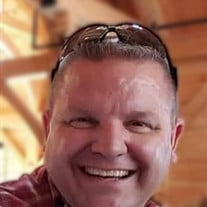 David Leroy Ingle, 52, of Iola, Kansas, passed away at 9:00 PM on Tuesday, January 4, 2022, at the Colmery-O'Neil VAMC Hospital in Topeka, Kansas. He fought his battle with COVID-pneumonia with strength and courage, traits that he demonstrated in all other aspects of his life. David was born on July 27, 1969, in Moline, Illinois. He was the second of three children born to Robert Waylon and Dianna Maxine (Bowers) Ingle. He graduated from Sullivan High School, Class of 1987, in Sullivan, Illinois. Upon graduation, he joined the United States Army and was stationed in Germany and later Fort Campbell, Kentucky. David was a veteran of Operation Desert Shield and Operation Desert Storm. In 1989, David married Julie Ann Mayberry; they made their home in Indianapolis before moving to Iola. They were blessed with three children, Michaela, Hannah, and Mason, and later divorced. After his honorable discharge from the military, David graduated from the ITT Technical Institute in Indianapolis, Indiana. In April of 2006, David began his law enforcement career, graduating from the police academy. He enjoyed 12 years of bravely working alongside his fellow officers with great commitment to the welfare of Iola and the Allen County community. David enjoyed simple pleasures such as fishing, woodworking, participating in the family rivalry between the Chicago Cubs and the St. Louis Cardinals, and spending time with his family. David married Elizabeth Donnelly on November 10, 2018. Their years together were few, according to the calendar, but they enjoyed an immense love for each other and shared countless laughs and made many wonderful memories. In their free time, David and Elizabeth enjoyed camping, fishing, and working on projects around the house. David was a member of Waypoint Iola Church. David has been poignantly described as the most hard-headed, softest hearted person God ever created. As a devoted husband, loving father, and loyal friend, David welcomed others with an infectious smile and incredulous stories. He loved to laugh and make others laugh. David always looked for ways to serve Elizabeth and the rest of his family. He loved pleasing his family, and he particularly enjoyed time spent playing with his granddaughters. For those who were blessed enough to know him, he was grounded, honest, and loyal. David loved with his whole heart and with no expectations. David is survived by his wife, Elizabeth Donnelly of Iola; two daughters, Michaela Rodriguez and Nate of Chanute, Kansas; Hannah Peters and Brock of Lebo; two sons, Mason and Alex of Iola; two granddaughters, Veronica and Jemma; mother and father, Dianna and Waylon Ingle of Fort Myers, Florida; brother, Bob Ingle and Jana of Wright City, Missouri; sister, Kathy Riley and Mike of Overland Park, Kansas; mother-in-law, Ana Ornelas; and brother-in-law, Joe Ornelas. He is also survived by numerous aunts, uncles, cousins, nieces, and nephews. His legacy can continue in those who knew and loved him, emulating David's traits of being kind, respectful, approachable, and helpful. A celebration of David's life will be held at 10:30 AM, Friday, January 14, 2022, at the Bowlus Fine Art Center, 205 E. Madison Avenue, Iola. Burial with military honors will follow in the Highland Cemetery, Iola. David's family will greet friends from 6:00 - 8:00 PM, Thursday evening, in the Venue at Feuerborn Family Funeral Service, 1883 US Hwy 54, Iola. Memorial contributions may be made to 10-33 Foundation and may be left in care of the funeral home. Condolences to the family may be left at www.feuerbornfuneral.com.

David Leroy Ingle, 52, of Iola, Kansas, passed away at 9:00 PM on Tuesday, January 4, 2022, at the Colmery-O'Neil VAMC Hospital in Topeka, Kansas. He fought his battle with COVID-pneumonia with strength and courage, traits that he demonstrated... View Obituary & Service Information

The family of David Leroy Ingle created this Life Tributes page to make it easy to share your memories.

Send flowers to the Ingle family.