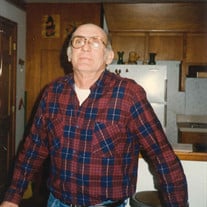 Darold Murry, age 85, of LaHarpe, Kansas passed away on April 10, 2021 at the Allen County Regional Hospital, Iola. Darold Edward Murry was born on October 27, 1935 at Columbus, Kansas. He was the second of three children born to Gene and Jessie (Mayhood) Murry. He grew up in Columbus, graduating from Columbus High School. Darold served in the US Marine Corps from 1954 to 1962. Darold married Margie "June" (Herron) Miller, following their marriage he adopted June's two sons, Robert M. and Richard T. Darold and June also had two additional children, Darold Kevin and Teresa. Darold worked in retail grocery for many years, working in stores in Iola, Uniontown, Baxter Springs and Joplin, Missouri. He later managed the Cedar Cove Resort on Grand Lake in the 1990's. Darold loved life to the fullest. His faith and sharing his testimony became a large part of his life. Darold was a member of several bible study groups and would speak at Sunday services when invited. Over the years Darold had many interests, he was a private pilot with his own plane, he later enjoyed flying rc planes with his grandson. He loved the lake life and all things boating, especially fishing and teaching others to ski. One of his greatest joys was riding his Goldwing motorcycle and the camaraderie of the Iola Goldwing Club. He was preceded in death by his parents; son, Kevin Murry; two sisters, Delores Hamblin and Nancy Wise; two grandchildren, Rick Dyer and Lori Murry. Darold is survived by his two sons, Mike Murry and wife, Vicki of Lawrence, Kansas and Richard Murry and wife, Barbara of Iola; daughter, Teresa Dyer and husband, Rick of Tulsa, Oklahoma; six grandchildren; and several great grandchildren. Private family services are being planned for a later date. Condolences to the family may be left at www.feuerbornfuneral.com.

Darold Murry, age 85, of LaHarpe, Kansas passed away on April 10, 2021 at the Allen County Regional Hospital, Iola. Darold Edward Murry was born on October 27, 1935 at Columbus, Kansas. He was the second of three children born to Gene and Jessie... View Obituary & Service Information

The family of Darold Edward Murry created this Life Tributes page to make it easy to share your memories.

Darold Murry, age 85, of LaHarpe, Kansas passed away on April...

Send flowers to the Murry family.