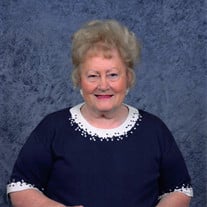 Darlene V. Hall, age 91, passed away on December 22, 2021. Darlene was born in Iola, Kansas, to Lee and Pauline (Franklin) Morrison. She grew up in the Anderson and Allen County area. Darlene married Alvin Gale "Doc" Hall on April 24, 1947. They were blessed with two sons, Johnnie Hall and Richard Hall. They made their home in Colony in the 1980's where they enjoyed many years until Doc passed away in 1993. Darlene enjoyed buying and selling all kinds of things from real estate to furniture. In her later years Darlene enjoyed several years of companionship with Ron Cunningham. Darlene loved riding horses, Palominos always held a special place in her heart. She was preceded in death by her husband, Alvin; her parents Lee and Pauline Morrison; 3 brothers, Victor, Vernon and Gerald Morrison. Darlene is survived by her two sons, Johnnie and wife, Monte, of Brookline Station, Missouri and Richard and wife, Tammy of Topeka, Kansas; six grandchildren; eleven great grandchildren; three great-great-grandchildren; companion, Ron Cunningham of Colony, Kansas; two sisters, Ima Jean Nichols and Mary Tice of Ottawa. Kansas. Services for Darlene Hall will be held at 2:00 PM on Wednesday, December 29, 2021, at Feuerborn Family Funeral Service, 1883 US Hwy 54, Iola, with pastor Steve Bubna officiating. The family will greet friends from 1:00 PM until the start of the service. Burial will follow at Colony Cemetery in Colony, Kansas. Memorial contributions can be made to Colony First Responders and may be left with the funeral home or mailed to Feuerborn Family Funeral Service, 1883 US HWY 54, Iola, KS 66749. Condolences may be left at www.feuerbornfuneral.com.

The family of Darlene Viola Hall created this Life Tributes page to make it easy to share your memories.

Send flowers to the Hall family.