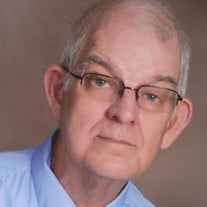 Daniel Lee "Danny" Johnson, age 70, passed away Sunday, November 7, 2021, at his home in Iola, Kansas. Danny was born February 5, 1951, to Rahe and Barbara (Greenwood) Johnson in Yankton, South Dakota. He joined the United States Air Force right after graduating from high school. After his service in the Air Force, he attended Allen County Community College before transferring to Pittsburg State University where he obtained his Bachelor Degree. He worked as a copy technician for Iola Copy Products, Inc. for a number of years. Danny married Linda (Kern) Johnson on June 10, 1973, in Garden City, Kansas. Their union was blessed with three sons. Danny was heavily involved in the fine arts community within Allen County. Most notably, Iola Community Theatre, Iola Municipal Band, and Symphony Orchestra. He also participated in Iola Vespers and church choir. A member of the Elks, Rotary, Friends of the Library and Bowlus, among many other community organizations throughout his life in Iola. During his children's childhood, he was active in their sports activities. He had a love for music and a great sense of humor. Danny is preceded in death by his parents, Rahe and Barbara Johnson. Danny is survived by his wife of 48 years, Linda Johnson; sons, Rick Johnson (Patti), Chad Johnson (Charlene), and Bryan Johnson (Jenni); brother, Jim Johnson (Virginia); grandchildren, Emma Saracina (James), Evan Johnson, Owen Johnson, Austen Johnson, Jeffrey Ashworth, and Jessa Ashworth; and numerous other family members and friends. A funeral service to honor the life of Danny will be held at 10:00 A.M. on Thursday, November 11, 2021, at Wesley United Methodist Church in Iola, Kansas. Burial will follow at Highland Cemetery. Family will greet friends the night prior to the service at Feuerborn Family Funeral Service in Iola, Kansas, from 6:00 P.M. to 8:00 P.M. on Wednesday, November 10, 2021, in The Venue. Memorials in honor of Danny are suggested to the Bowlus Fine Arts Center and may be left with the funeral home or mailed to 1883 U.S. Highway 54, Iola, Kansas, 66749. Condolences for the family may be left online at www.feuerbornfuneral.com.

The family of Daniel Lee "Danny" Johnson created this Life Tributes page to make it easy to share your memories.