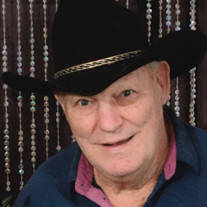 Curtis Alvin Madsen, age 86, of Greeley, Kansas, passed away on Sunday, June 13, 2021, at his home. He was born April 23, 1935, in Minidoka, Idaho, the son of Alvin R. and Dora (Wheeler) Madsen. He graduated from Rupert High School in Minidoka, Idaho. Curtis graduated from Idaho State University in Pocatello, Idaho and became an electrical engineer for Thiokol, Inc. producing rocket boosters. In 1974, he owned and operated Logan Monument, in Logan, Utah. Curtis loved to travel and elk hunt, also, going to auctions and junk yards; restoring and building cars, trucks, forklifts, and buses. He was raised as a blacksmith in the Family Blacksmith Shop helping his dad with his inventions, like a bean cutter which he sold to John Deere and it is still used by them. He married Mercy Casias in 1955 and that union produced five children and ended in divorce in 1981. In 1985, he married Cassie Beaumont, mother of three, until the time of her death in 2009. He then married Jackie Finney, mother of ten, in 2010. Jackie was and still is his happily married wife at the time of his passing to his heavenly home. Curtis was preceded in death by his parents, Alvin and Dora Madsen; and one brother, Budd Madsen. He is survived by his wife, Jackie Finney, of the home; six children; many grandchildren and great grandchildren; two sisters, Donna Mix and Patricia Larsen; and several adopted families in Utah and Idaho. Cremation is planned and a Celebration of Life will be held at 2:00 P.M., on July 10, 2021 at the Church of Jesus Christ of Latter-Day Saints, 1212 Willow Ln, Ottawa, KS 66067 by the family. Memorial contributions may be made to the Curtis Madsen Memorial Fund, and can be sent to Feuerborn Family Funeral Service, PO Box 408, Garnett, KS 66032. You may send your condolences to the family at www.feuerbornfuneral.com.

Curtis Alvin Madsen, age 86, of Greeley, Kansas, passed away on Sunday, June 13, 2021, at his home. He was born April 23, 1935, in Minidoka, Idaho, the son of Alvin R. and Dora (Wheeler) Madsen. He graduated from Rupert High School in Minidoka,... View Obituary & Service Information

The family of Curtis Alvin Madsen created this Life Tributes page to make it easy to share your memories.

Send flowers to the Madsen family.