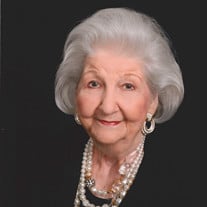 Claire Elizabeth (Huggins) Mays was born on November 14, 1921, near Selma, Kansas. Claire was the sixth of six children born to Bert and Hallie (Tucker) Huggins. At an early age, she moved with her family to Garnett, Kansas. She attended Longfellow and Irving grade schools, and Garnett High School. She was a member of the First Christian Church, Garnett. Claire was united in marriage to Clyde Mays on March 22, 1942, in Garnett. This union was blessed with two children, Clyde Jr. and Judith Elaine. In 1952, they made their home in Moran, Kansas, where her children attended grade school and high school. Claire was a loyal supporter of all their school activities. They were all members of the First Christian Church, where Claire taught Sunday School and Vacation Bible School. In 1961 and 1962, Claire served as President of the Moran Parent Teachers Association and President of the American Legion Jones Hardy Post #385 Auxiliary. In 1963, she and her family moved to Iola, Kansas. After living in Iola for thirty years, Claire made her home with her daughter Judith, in Dallas, Texas. She returned to Iola in 2003. Claire was a member of the First Christian Church in Garnett. On August 2, 2021, Claire went Home to be with the Lord. Preceding her in death were her parents; her husband, Clyde on April 8, 2009; her son, Clyde Jr. on August 23, 1998; four brothers, Eugene, Ivan, Arthur, Bert Jr.; and her sister, Hazel Gifford. Claire is survived by her daughter, Judith Mays of the home and her granddaughter, Jennifer Lyn Mays of Nyack, New York. Claire was an aunt to four generations on the Huggins side of her family. Funeral services will be held at 10:30 A.M., Saturday, August 7, 2021, at the First Christian Church in Garnett. Claire's family will greet friends from 9:30 A.M. until the start of the service. Burial will follow in the Garnett Cemetery. Claire will lie in state at the Feuerborn Family Funeral Service Chapel, Iola, from 8:00 A.M. - 5:00 P.M. on Friday. Memorials in honor of Claire are suggested to First Christian Church of Garnett and may be left with the funeral home or mailed to 1883 US Hwy 54, Iola, Kansas, 66749. Condolences to the family may be left at www.feuerbornfuneral.com.

Claire Elizabeth (Huggins) Mays was born on November 14, 1921, near Selma, Kansas. Claire was the sixth of six children born to Bert and Hallie (Tucker) Huggins. At an early age, she moved with her family to Garnett, Kansas. She attended... View Obituary & Service Information

The family of Claire Elizabeth Mays created this Life Tributes page to make it easy to share your memories.

Send flowers to the Mays family.