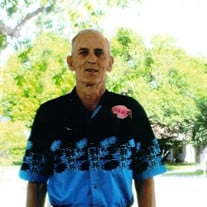 Charles Joseph Wille, age 82, of Piqua, Kansas, passed away peacefully at his home surrounded by loved ones on Thursday, March 18, 2021. He was born February 8, 1939, in Iola, Kansas, the oldest son of Carl N. and Irene A. (Haen) Wille. He was a lifelong resident of Piqua and attended school there. He and Shirley Danford were married November of 1993 until she passed in 1999. He later married Jerry L. Smith on June 9, 2007. She survives of the home. Charles was drafted into the United States Army November of 1961 where he was stationed in California and Germany. He was honorably discharged in 1963. After his service, Charles worked at the Ford dealership in Iola, Kansas for approximately 19 years. When he retired, he went to farming and ranching full-time, where he enjoyed the outdoors and his cattle. He was a life member of the Ottawa V.F.W. Post 5901. Charles enjoyed spending time in his shop doing woodworking, fixing up and painting tractors. He also enjoyed restoring his 1975 F150 truck. His favorite passion was going to dances and waltzing with his wife. Charles was preceded in death by his parents, Carl and Irene Wille and a sister Wilma. He is survived by his wife Jerry of the home; four brothers, Donald Wille and wife Sandy of Valley Center, Kansas, Robert Wille of Iola, Kansas, Ronald Wille of Piqua, Kansas, and Eugene Wille and wife Bessie of Iola, Kansas; several stepchildren, step grandchildren, and step great grandchildren; and several nieces and nephews. Viewing will be held at 1:00 P.M., on Monday, March 22, 2021, at the Feuerborn Family Funeral Service Chapel, 1883 US Hwy 54, Iola, with graveside services following at 2:00 P.M., at the St. Martin's Cemetery, Piqua, Kansas. Memorial contributions may be made to Friends for Life of Yates Center. You may send your condolences to the family at www.feuerbornfuneral.com.

Charles Joseph Wille, age 82, of Piqua, Kansas, passed away peacefully at his home surrounded by loved ones on Thursday, March 18, 2021. He was born February 8, 1939, in Iola, Kansas, the oldest son of Carl N. and Irene A. (Haen) Wille.... View Obituary & Service Information

The family of Mr. Charles J. Wille created this Life Tributes page to make it easy to share your memories.

Send flowers to the Wille family.