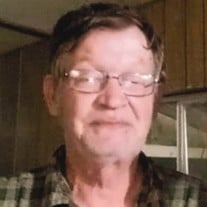 Charles "Charlie" R. Turner, age 70, of Iola, Kansas, formerly of Welda, Kansas, passed away on Monday, August 23, 2021, at KU Medical Center, Kansas City, Kansas. He was born October 28, 1950 in Colony, Kansas, the son of Charles Jr. and Alta Betty (Christy) Turner. He graduated from Crest High School, Colony, Kansas. Charlie married Deborah Newman on December 21, 1975 in Iola, Kansas. This union was blessed with one daughter, Carla Turner, they later divorced. Charlie was a very hard worker, helping out anyone he could when they needed an extra hand. He enjoyed playing cards, dominos, and especially spending time with family. Charlie was loved by many and will be missed. He was preceded in death by his parents; and one sister, Charlene Turner on August 12, 2021. Charlie is survived by his four children, Carla Turner and fiancé Bryan Wilson of Ottawa, Kansas; Samson Turner, Liberty Jane Turner, and Ezekiel Turner; two grandchildren, Cassandera Hackathorn and husband Jonathan of Redfield, Kansas; and Allen Michael Turner of Fort Scott, Kansas; two great grandchildren, Ava Marie and Anthony Hackathorn of Redfield, Kansas; one sister, Sandra Noyes; one niece, Dawn Hatfield and her children, Tyler and Tucker, all of Welda, Kansas. Funeral services will be held at 10:00 am., on Tuesday, August 31, 2021, at the Feuerborn Family Funeral Service Chapel, Garnett, with burial to follow in the Welda Cemetery. Family will greet friends on Monday evening at the funeral home from 6:00 p.m. to 8:00 p.m. Memorial contributions may be made to the Charles Turner Memorial Fund or to Autism Speaks. You may send your condolences to the family at www.feuerbornfuneral.com.

The family of Charles "Charlie" R. Turner created this Life Tributes page to make it easy to share your memories.

Send flowers to the Turner family.