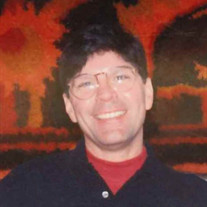 Charles James Church, age 70, of Leavenworth, Kansas, died of natural causes on Sunday, February 21, 2021 at Medicalodge of Leavenworth. Charles was the third of six children born to Dale and Lilia (Sosa) Church. He was born at The Anderson County Hospital on October 9, 1950. In 1968, Charles was a member of the first class to graduate from Crest High School, in Colony, Kansas. He went on to earn a bachelor's degree in Special Education at Emporia State University and a master's degree in Psychology at The University of Kansas. After college Charles worked as a special education teacher at Shawnee Mission North High School and Lawrence High School. In the late 1970's Charles worked as a Special Education consultant and trainer for The Alaska State Department of Education where he traveled the state of Alaska by plane. He later worked as a presenter for The Weyerhaeuser Corporation in California. Charles lived in California for twenty plus years before returning to Kansas in 2014. Charles was grateful for the time he was able to spend with his cousin, Rebecca Sosa Lopez while living in California. After he returned to Kansas he lived in Iola, later moving to Leavenworth, where he lived his final seven years. While in Leavenworth Charles made many friends at Twin Oaks Independent Living, The Abernathy Apartments, and The Medicalodge. As a young man, Charles became enthusiastically involved in the world of professional dog shows. A highlight was having one of his dogs compete at The Westminster Show in New York, in 1978. His Terriers were not just his hobby, they were his family. Charles was a gifted cook and host, who loved to travel the world. While Charles lived away from his nieces and nephews he loved and encouraged them in their endeavors. Charles was preceded in death by his parents, his younger brother, Joseph Marshall Church, and his longtime companion Perry Taub. Charles is survived by his sister Mary Hunt and husband Alan of Brevard, North Carolina; three brothers, Robert Church and wife Jeanette of Xenia, Kansas, Ken Church and wife Sandra of Leavenworth, Mike Church and wife Jeanna of Carlyle, Kansas; cousin, Rebecca Sosa Lopez and husband Sam of Grand Junction, Colorado; aunt, Celia Vasquez of Tucson, Arizona, and many cousins, nieces, and nephews. The family of Charles Church would like to thank Rodney Close, the leader of Medicalodge of Leavenworth, the compassionate and dedicated staff for taking wonderful care of Charles. In addition, we want to thank the great people at Avalon Hospice for all of their excellent care for Charles. Memorial Services will be held at 11:00 A.M., on Saturday, July 31, 2021, at the Feuerborn Family Funeral Service Chapel, Garnett. Family will greet friends following the service at the Lone Elm Community Building in Lone Elm, Kansas. Memorial contributions may be made to the Lone Elm Community Building and left in care of the funeral home. You may send your condolences to the family at www.feuerbornfuneral.com.

Charles James Church, age 70, of Leavenworth, Kansas, died of natural causes on Sunday, February 21, 2021 at Medicalodge of Leavenworth. Charles was the third of six children born to Dale and Lilia (Sosa) Church. He was born at The Anderson... View Obituary & Service Information

The family of Charles James Church created this Life Tributes page to make it easy to share your memories.

Send flowers to the Church family.