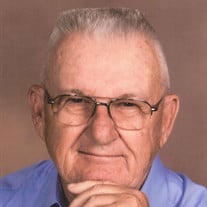 Carter Ray Stiffler, age 85, passed away Saturday, October 23, 2021, at his home in Iola, Kansas. Carter was born July 16, 1936, in Kincaid, Kansas, to Howard and Addie (Hardin) Stiffler. After graduation from Kincaid High School in 1954, he attended Pittsburg State University for two semesters. In 1956, he accepted the position of custodian and school bus driver for Kincaid Elementary School. He held that position for seven years. During this time his family grew. He was blessed with a son and two daughters. Then, in 1963, he accepted the position of plant manager for Union L/P Gas Systems in the Kincaid area, where he held the position for 11 years. In 1974, he moved to Colony, Kansas and was in furniture sales in Iola, Kansas for about 10 months. He was then employed by the Kansas Department of Transportation at Garnett. After 21 years, he retired with the state. During those 21 years, he was blessed with a growing family to include numerous grandchildren. Retirement brought along traveling and meeting many new friends. He was very excited to tell people, "To sum it all up, I now do mostly what I want, when I want and I am thoroughly enjoying life!!!" Carter is preceded in death by his parents, Howard and Addie Stiffler; and son, Donald Stiffler. Carter is survived by daughters, Janet Roeder and Susan Stiffler; nine grandchildren; eleven great-grandchildren; several nieces and nephews; and numerous other family members and friends. Private family services are planned. Memorials in honor of Carter are suggested to The Cancer Research Institute and may be left with Feuerborn Family Funeral Service or mailed to 1883 U.S. Highway 54, Iola, Kansas, 66749. Condolences for the family may be left at www.feuerbornfuneral.com.

The family of Carter Ray Stiffler created this Life Tributes page to make it easy to share your memories.

Send flowers to the Stiffler family.