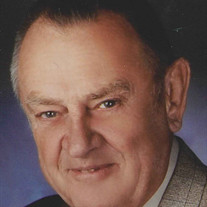 Carroll R. Weber of Iola passed away Friday, March 19, 2021 after a prolonged fight with bladder cancer. Carroll was born to Rev. Frank C. and Cecelia Weber on August 24, 1927 in Nebraska, the youngest of four boys. Rev. Weber served at several small towns in Nebraska before being posted to Callahan Church near Murdock when Carroll was in second grade. Having four boys move to the small town of Murdock caused quite a stir among the girls in town. Carroll met Faith there, not knowing they would spend more than 71 years together. Faith remembers the first day Carroll joined their class. Kids asked why he had a girl's name, but he just smiled. He knew it was a good name. Faith said he got into a small fight with the doctor's son once and acquired the nickname "Popeye". That nickname stuck for many years. Carroll was best friends with Faith's twin brother David, so they all spent lots of time together. They didn't want her around when they went skinny dipping in the creek, though. One time they pranked her by putting her in the shelled corn bin and filling her underpants with corn. She was not amused. Carroll lost his brother Marvin in the late stages of WWII, but still convinced his parents to let him join the Merchant Marines at age 17. After his service, he returned to Lincoln, Nebraska. On November 11, 1949, Carroll married Faith Eleanor Rieke at Callahan Church. They celebrated 71 years together in 2020. Carroll and his brother Earl Weber started a printing service in Lincoln called Weber Bulletin Service. They specialized in church bulletins and photography services for real estate. His kids' favorite part of the business was when he went out on Saturday morning to take pictures of houses. He would let one kid at a time go with him on his route. On nice days he would let them ride in the back of the pickup truck, and they all survived! It was great fun, and he would also stop for doughnuts. We thought they were the greatest food ever invented. While in Lincoln, Carroll stayed busy every weekend building a cabin and boat house on Hanson Lake 2 south of Omaha. He and Dave built it together, and the two families and friends had fun there every weekend in the summer. It was a small lake, but it was a sand pit next to the Platte River, so it was all a huge sandy beach. They had a small boat with a 25hp motor to ski behind. The grownups took off from sitting on the dock because the boat had to get some speed first. The kids and adults quickly learned to slalom off the shore, with three loops of the tow rope in their hand, and they would not even have to get wet. Carroll and Dave made some trick skis and skied backwards, entertaining everyone on the lake. In 1967, Carroll made the decision to strike out on his own, and he and Faith bought the Majestic Motor Inn in Iola and moved there with their three children. He became involved in civic life in Iola, joining the Chamber of Commerce, becoming their president for a time, and Iola Rotary. He worked to expand jobs and industry in Iola. He and Faith later partnered with others on other motels in Kansas. They ran the Majestic Best Western until selling it in 1982 with an eye toward retirement. Carroll discovered he did not take well to retirement, so he and Faith bought and remodeled a motel in Lincoln, Nebraska. In the early 90's, Carroll and Faith reacquired the Best Western in Iola and ran it for another 15 years before retiring for good. They enjoyed their retirement on the Country Club golf course in Gas City. Carroll will be terribly missed by his wife, Faith of Iola; son, Alan of Humboldt; daughters, Barbara and son-in-law, Jim Magill of Columbia, Missouri and Patty and son-in-law, Paul Edwards of Rogers, Arkansas; granddaughter, Katie Weber-Scholz of Lawrence, Kansas and Stephanie Harris of Bella Vista, Arkansas; grandsons, Justin Magill of Columbia, Missouri and Chris Edwards of Gravette, Arkansas; and three great-grandchildren, Samuel and Jake Edwards, and Cason Harris. No services are planned at this time. A celebration of life may be scheduled at a later date. Memorials are suggested to IAMA Community Food Pantry or Humanity House in Iola and may be left with Feuerborn Family Funeral Service or mailed to 1883 U.S. Highway 54, Iola, Kansas 66749. Condolences for the family may be left online at www.feuerbornfuneral.com.

The family of Carroll R. Weber created this Life Tributes page to make it easy to share your memories.

Send flowers to the Weber family.