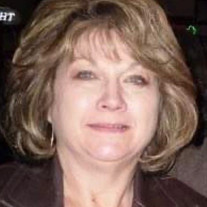 Carol Ann West, age 70, won her battle with cancer on Wednesday, December 15, 2021, at her home in Topeka, Kansas. Carol was born July 12, 1951, in Fort Scott, Kansas, to Billy and Carol (McHenry) Meech. She attended school in Blue Mound, Kansas. She married Mike Malloy on March 26, 1968 during her junior year of high school. Their union was blessed with three children. They later divorced. She later married Jim West. They divorced. She worked for the City of Iola for the majority of her career. Carol was known for her contagious smile. Her grandbabies meant the world to her. She spent as much time with them as she could. Carol's faith was very strong and her relationship with God was very personal. It was her faith that gracefully carried her through her long battle with cancer. Carol is preceded in death by her parents; and great-grandson, Jamarion Garcia "Neenie's little papoose". Carol is survived by her three children, Shawn Malloy, Dawn Malloy, and Amanda Malloy; siblings, Patsy Pollet (Clarence), Carla Powell (Jim), Billy J. Meech, and Keith E. Meech; step-mother, Joyce Meech; grandchildren, Josh Malloy, Haylee Malloy, Hunter Malloy, Bryce Malloy, Kyree Hanson, and Kerzia Hanson; great-grandchildren, Julia, Kiara, Josh, Kallie, Jett, and Jordyn; and numerous other family members and friends. A funeral service to honor the life of Carol will be held at 2:00 P.M. on Tuesday, December 28, 2021, at Feuerborn Family Funeral Service in Iola, Kansas. Burial will follow at LaHarpe Cemetery in LaHarpe, Kansas. Memorials in honor of Carol are suggested to the Carol West Memorial Fund and may be left with the funeral home or mailed to 1883 U.S. Highway 54, Iola, Kansas, 66749. Carol West's funeral service can be watched here: https://vimeo.com/659778699

The family of Carol West created this Life Tributes page to make it easy to share your memories.

Send flowers to the West family.